US complicit in all Saudi crimes, won’t punish Riyadh

Rasa - The United States is an accomplice to Saudi Arabia’s crimes around the world and will never punish the kingdom over its international violations, an American academic says, rejecting President Donald Trump’s pledges to hold Riyadh accountable for the mysterious disappearance of anti-Riyadh journalist Jamal Khashoggi. 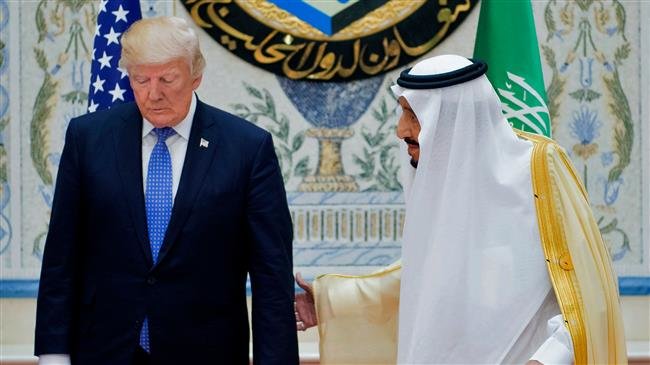 RNA - Khashoggi went missing after entering the Saudi consulate in the Turkish city of Istanbul on October. Various intelligence sources in the US and Turkey say he was tortured and murdered at the complex under direct order from Saudi Crown Prince Mohammed bin Salman.

Trump has pledged to “punish” Saudis if it turns out that they killed Khashoggi. However, he has also made it clear that he won’t move away from the strategic Middle East ally and risk billions of dollars in weapons deals with Riyadh.

Dr. Dennis Etler, a scholar and political analyst in California, said Trump would let MBS get away with the crime with a “slap on the wrist” at best.

“Saudi strongman Crown Prince Mohammad bin Salman (MBS), BFF of Trump’s arch Zionist son-in-law Jared Kushner, must feel that he can literally get away with murder with impunity,” Etler said.

“He knows full well that the US will only make a show of outrage and then walk back any serious repercussions for his acts.”

The scholar highlighted extended financial and political ties between Riyadh and Washington and said neither of the two sides was ready to walk away from the strong alliance.

“Saudi Arabia, along with Israel, is a lynchpin of US strategic interests in the Middle East and North Africa (MENA),” Etler said.

“Not only is Saudi Arabia a ready market for massive US arms sales, but they supply the funding and ideological underpinning for the scourge of Takfiri terrorism that has plagued the world for over two decades and supplied the US with storm-troopers to destabilize and take down nations throughout MENA and beyond that have stood up to its imperialist designs for regional and global hegemony,” he added.

Noting that Saudi Arabia has been “a loyal satrap of the Empire,” the analyst said Trump was not going to give it any hard time unlike countries like Iran and Russia.

“The US has played the game of “plausible deniability” for decades. They have used denials of culpability as a get out jail card for themselves and their loyal lackeys whenever confronted with incontrovertible evidence of their own wrong-doing,” he said.

“With only the flimsiest of evidence the US will slap sanctions on one country after another without hesitation when it suits their imperial ambitions,” Etler argued.

“But when it comes to Saudi Arabia and its royal family the US will bend over backwards to accommodate their every sin, because in fact the US is complicit in them all,” he concluded.

Tags: Trump Saudi
Short Link rasanews.ir/201qkq
Share
0
Please type in your comments in English.
The comments that contain insults or libel to individuals, ethnicities, or contradictions with the laws of the country and religious teachings will not be disclosed