Rasa - UK Labour leader Jeremy Corbyn, who is battling allegations of anti-Semitism in his party, has come under fire for a 2010 speech where he said speeches British lawmakers make are controlled by the Tel Aviv regime. 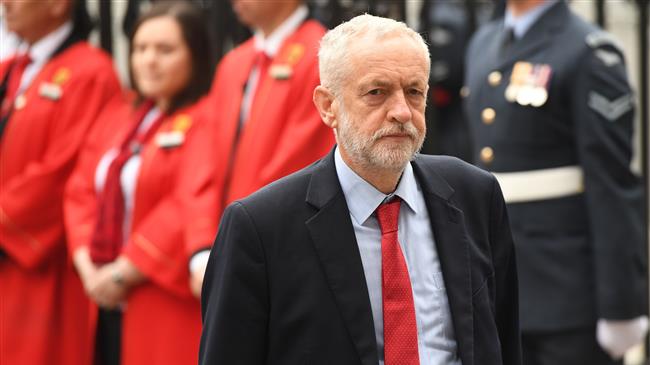 RNA - The videotaped remarks were made during Corbyn’s meeting with the Palestine Solidarity Campaign in London following Israel’s deadly raid on an aid flotilla that attempted to break the years-long blockade on the Gaza Strip, the Daily Mail reported Tuesday

During the May 2010 attack, 10 Turkish activists onboard the Mavi Marmara were killed after Israeli naval commandos boarded the ship and opened fire.

Criticizing British lawmakers’ pro-Israeli reactions to the attack, Corbyn reportedly said during the meeting that the MPs “all turned up [to the debating chamber] with a pre-prepared script. I’m sure our friend Ron Prosor (the Israeli ambassador) wrote it. Because they all came up with the same key words. It was rather like reading a European document looking for buzz-words.”

“And the buzz-words were, ‘Israel’s need for security.’ And then ‘the extremism of the people on one ship.’ And ‘the existence of Turkish militants on the vessel.’ It came through in every single speech, this stuff came through,” he added.

The Israeli lobby has long complained about what it calls Corbyn’s tolerance for anti-Semitism in his party.

An open critic of Israel’s crimes against the people of Palestine, Corbyn has drawn fire from his opponents by allowing the members of his party to speak their mind about Israel and its occupation of Palestinian lands.

Earlier this week, the Campaign Against Anti-Semitism launched an online campaign to pressure Labour lawmakers into issuing a vote of no-confidence in Corbyn and force him to resign.

The Labour leader most recently came under fire for video footage of a speech from 2013, where he says “Zionists” can’t understand British ways of thinking despite growing up in the country. Corbyn defended his remarks, saying by Zionists did not mean Jews.

Meanwhile, Corbyn’s allies in and outside of the UK have rushed to his support in the face of the Israeli media upsurge that try to portray him as an anti-Semite.

According to Press TV, Israeli lawmaker Haneen Zoabi said Wednesday that the attacks against Corbyn were “unjust, offensive and absurd.”

"Corbyn's criticism is justified. And the state, which deals with theft, murder and racist acts under the law of nationality, is rightly justified by this criticism," the Israeli Knesset member said.

Tags: Jeremy Corbyn Israel
Short Link rasanews.ir/201qHU
Share
0
Please type in your comments in English.
The comments that contain insults or libel to individuals, ethnicities, or contradictions with the laws of the country and religious teachings will not be disclosed