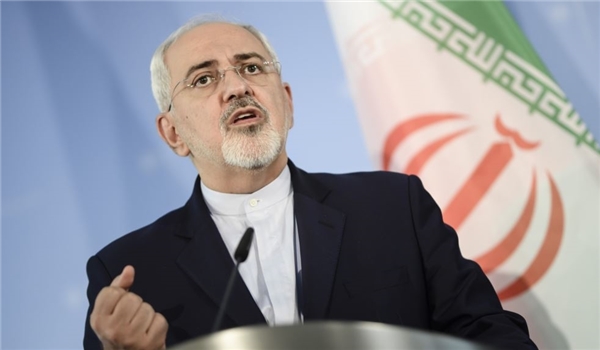 RNA - Speaking during a ceremony at the Dimona nuclear arms facility in the Negev desert on Wednesday, Netanyahu had claimed that the occupying entity faces threats from near and far.

“Those who threaten to wipe us out put themselves in a similar danger, and in any event will not achieve their goal,” he said. “But our enemies know very well what Israel is capable of doing. They are familiar with our policy. Whoever tries to hurt us – we hurt them,” said Netanyahu.

Hours later, Zarif took to Twitter to respond to the hawkish Israeli premier’s highly aggressive threat, which came on the same day that the world nations were observing the International Day against Nuclear Tests.

“Iran, a country without nuclear weapons, is threatened with atomic annihilation by a warmonger standing next to an actual nuclear weapons factory,” tweeted the top Iranian diplomat, describing Netanyahu’s statements as “beyond shameless.”

Iran, a country without nuclear weapons, is threatened with atomic annihilation by a warmonger standing next to an actual nuclear weapons factory. Beyond shameless in the gall. pic.twitter.com/MBoFac8Bvv
— Javad Zarif (@JZarif) August 29, 2018

Israel is the only possessor of nuclear weapons in the Middle East, but its policy is to neither confirm nor deny that it has atomic bombs. The Tel Aviv regime is estimated to have 200 to 400 nuclear warheads in its arsenal.

Unlike Iran, the regime has refused to join the Nuclear Non-Proliferation Treaty (NPT) -- whose aim is to prevent the spread of nuclear arms and weapons technology – in defiance of international pressure.

Marking the International Day against Nuclear Tests, Foreign Minister Zarif had earlier in the day slammed the Israeli regime and its stalwart supporter, the US, as the sole possessor of nuclear bombs in the region and the “sole user” of atomic weapons in the world, respectively.

“Let’s also remember that Iran has called for Nuclear Weapon Free Zone since 1974,” Zarif said in a tweet.

As world marks Int'l Day against Nuclear Tests, let's remember that only nuclear bombs in our region belong to Israel and the US; the former a habitual aggressor & the latter the sole user of nukes. Let's also remember that Iran has called for Nuclear Weapon Free Zone since 1974.
— Javad Zarif (@JZarif) August 29, 2018

Elsewhere in his comments, Netanyahu said the Israeli military will continue to target Iranian military advisers, who have been assisting the Syrian army in their battles against foreign-backed terrorists.

The Israeli military, Netanyahu said, "will continue acting with full determination and with full might against” what he called Iran’s attempts “to station forces and advanced weapons systems in Syria.”

Iran has no troops on the ground in Syria and its anti-terror advisory mission – like that of its ally Russia – comes at the request of the Damascus government.

Worried over Syria’s gains against terrorists, Israel frequently attacks military targets inside Syria in an attempt to prop up terrorist groups that have been suffering defeats on the battlefield.

The regime has also been providing weapons to anti-Damascus militants as well as medical treatment to Takfiri elements wounded in Syria.

On April 9, an Israeli airstrike against the T-4 airbase in Syria’s Homs Province killed more than a dozen people, including seven Iranian military advisers.

Tags: Iran Zarif Israel
Short Link rasanews.ir/201qHT
Share
0
Please type in your comments in English.
The comments that contain insults or libel to individuals, ethnicities, or contradictions with the laws of the country and religious teachings will not be disclosed