Rasa - More than 100 rights groups have called on Bahrain to "immediately release" prominent opposition figure and pro-democracy campaigner Nabeel Rajab after the United Nations condemned his detention as "arbitrary" and "discriminatory." 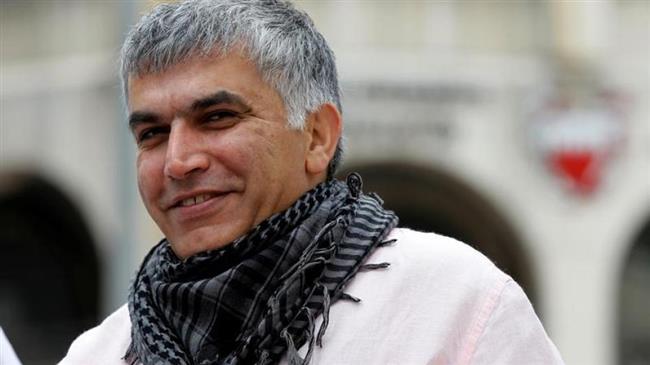 RNA - In an opinion issued earlier this month, the UN's Working Group on Arbitrary Detention denounced the detention of the 53-year-old president of the Bahrain Center for Human Rights (BCHR), calling on Bahrain to release Rajab and “accord him an enforceable right to compensation and other reparations, in accordance with international law.”

Some 127 non-governmental organizations, including Human Rights Watch, said in a statement on Wednesday that they "welcome this landmark opinion... recognizing the role played by human rights defenders in society and the need to protect them".

"We call upon the Bahraini Government to immediately release Nabeel Rajab in accordance with this latest request," the signatories added.

On February 21, a court in Bahrain sentenced the distinguished human rights activist to five years in prison over tweets deemed critical of the Manama regime and the deadly Saudi-led war against Yemen.

Bahrain’s Court of Cassation, which has the ultimate say in the case of appeals in the country, also upheld a two-year jail sentence against Rajab on January 15.

He faces a further 15 years in prison over a separate set of charges related to his criticism of the ruling Al Khalifah family and Wahhabism.

On December 22, 2016, Bahraini authorities accused Rajab of making comments that “harm the interests” of the Manama regime and other Persian Gulf kingdoms through an article attributed to him and published by French daily Le Monde.

The article slammed the Daesh Takfiri terrorist group for its crimes against humanity. It also condemned Persian Gulf Arab countries for their failure to stop the spread of the violent Wahhabi ideology.

According to Press TV, Wahhabism, the radical ideology dominating Saudi Arabia and freely preached by its clerics, fuels the ideological engine of terror organizations such as Daesh and Fateh al-Sham, al-Qaeda's Syrian branch formerly known as al-Nusra Front. Takfiri terrorists use the ideology to declare people of other faiths “infidels,” justifying the killing of their victims.

Tags: Human Rights Watch Manama Nabeel Rajab Wahhabism Al Khalifah bahrain
Short Link rasanews.ir/201qHQ
Share
0
Please type in your comments in English.
The comments that contain insults or libel to individuals, ethnicities, or contradictions with the laws of the country and religious teachings will not be disclosed