Rasa - A UN fact-finding mission says Myanmar’s military has carried out a series of “shocking” rights violations against Rohingya Muslims, including mass killings and gang rapes, adding the country’s commander-in-chief and other generals should stand trial for “genocide” and war crimes against the minority group. 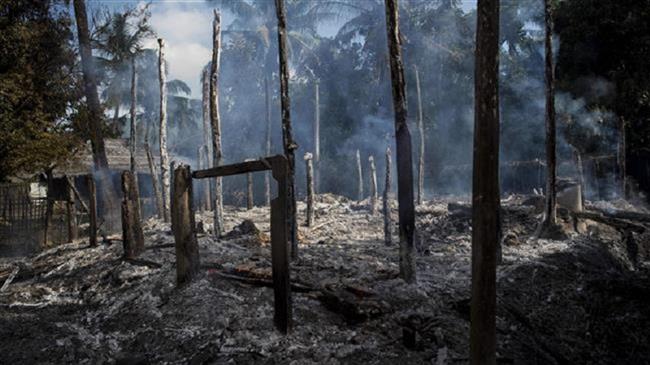 RNA - In its final report released on Monday, the UN Independent International Fact-Finding Mission on Myanmar said the country’s army, led by Commander-in-Chief Senior-General Min Aung Hlaing, had carried out the “gravest crimes” against the Rohingya with “genocidal intent.”

The UN investigators called for an international probe and prosecution of Myanmar’s army chief and five other top military commanders for their crimes.

“The crimes in Rakhine State, and the manner in which they were perpetrated, are similar in nature, gravity and scope to those that have allowed genocidal intent to be established in other contexts,” it said.

The findings of the team showed Myanmar’s military had taken actions that “undoubtedly amount to the gravest crimes under international law.”

“Expecting justice and truth from any Myanmar domestic process is simply naive. There is no will and no capacity” - Christopher Sidoti live now at Fact Finding Mission to #Myanmar press conference pic.twitter.com/SwvBH6kr7i
— HRC SECRETARIAT (@UN_HRC) August 27, 2018

The report said “There is sufficient information to warrant the investigation and prosecution of senior officials in the Tatmadaw (army) chain of command, so that a competent court can determine their liability for genocide in relation to the situation in Rakhine State,” where Rohingya Muslims are mainly based.

“Myanmar’s top military generals, including Commander-in-Chief Senior-General Min Aung Hlaing, must be investigated and prosecuted for genocide in the north of Rakhine State, as well as for crimes against humanity and war crimes in Rakhine, Kachin and Shan States,” the mission said.

The research is based on 875 interviews with witnesses and victims, satellite imagery, and verified photos and videos, said the mission’s chief, Marzuki Darusman.

Commenting on the report, Marzuki said the victims’ accounts were among “the most shocking human rights violations” he had heard of, and that the crimes will “leave a mark on all of us for the rest of our lives.”

Last year, Myanmar’s armed forces, backed by Buddhist extremists, launched a state-sponsored crackdown campaign against Rohingya Muslims in Rakhine under the pretext of a number of attacks on military posts blamed on the minority group.

The crackdown – once described by the UN as the textbook example of ethnic cleansing – forced some 700,000 Rohingya to flee to neighboring Bangladesh, where they are living in overcrowded refugee camps in dire humanitarian conditions.

The new report further lashed out at Myanmar’s de facto leader Aung San Suu Kyi for failing to give a proper response to the military’s brutalities, which have drawn widespread criticism from the United Nations and leading international organizations, including Amnesty International and Human Rights Watch.

It added that Suu Kyi -- a Nobel peace laureate -- had failed grossly to protect minority communities from crimes against humanity and war crimes by the army in Rakhine, Kachin and Shan states.

She not only had “not used her de facto position as head of government, nor her moral authority, to stem or prevent the unfolding events,” but also allowed hate speech to thrive and ordered incriminating documents destroyed.

In doing so, she “contributed to the commission of atrocity crimes,” the report said.

According to Press TV, the human rights team called for UN “sanctions against those who appear to be most responsible” for the horrific crimes.

The investigators also called on the UN Security Council to refer the Myanmar situation to the International Criminal Court, or for an ad hoc international criminal tribunal to be created.

The UN Security Council is set to hold a meeting  on Tuesday to discuss the situation in Myanmar.

In an earlier development, the court verdict in the case of two Reuters journalists charged with espionage in Myanmar was postponed.

Wa Lone, 32, and Kyaw Soe Oo, 28, who were doing investigative journalism about the crimes committed against the Rohingya are facing trial for allegedly spying on the Myanmarese army.

The Yangon court was on Monday scheduled to announce the verdict. But it was postponed until September 3 because the judge overseeing the case was said to have fallen ill.

Monday’s court session lasted just a few minutes, long enough for a judge standing in for Judge Ye Lwin  to announce that a ruling would be made next week.

“The judge is in poor health, so I am here to announce that the verdict is postponed to the third,” said Judge Khin Maung Maung.

The journalists’ lawyer, Khin Maung Zaw, told reporters that the stand-in judge had said to him that the verdict was ready; however, court procedure required that it be delivered by Judge Ye.

“We look forward to the receiving the verdict next week, when we very much hope that they will be acquitted and reunited with their families."

Tags: Rohingya UN Myanmar
Short Link rasanews.ir/201qGp
Share
0
Please type in your comments in English.
The comments that contain insults or libel to individuals, ethnicities, or contradictions with the laws of the country and religious teachings will not be disclosed