US Senator McCain’s hawkish stance led to the death of millions: Analyst

Rasa - US Senator John McCain, who died on Saturday at the age of 81, was a member of the US military elite whose hawkish foreign policy positions led to the death of millions of people, says an American sociopolitical analyst. 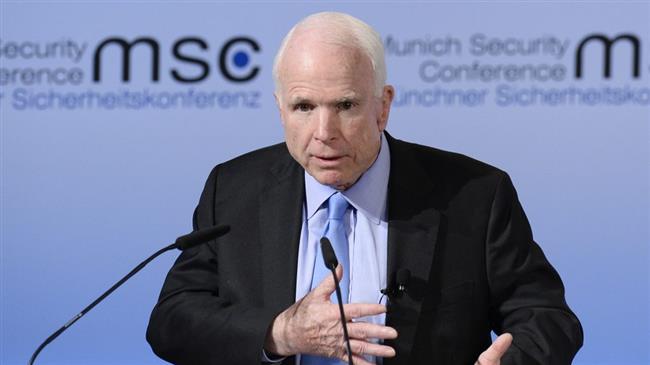 RNA - The former US presidential candidate, Vietnam war veteran and prisoner of war, had been diagnosed with a glioblastoma, an aggressive type of brain tumor back in July 2017.

McCain represented the state of Arizona as a member of the Republican Party in both chambers of Congress for 35 years.

McCain was the son and grandson of US Navy admirals. He became a fighter pilot during the Vietnam War. He was taken prisoner by north Vietnamese soldiers after his jet was downed  during a bombing assault over Hanoi and held in captivity for nearly six years.

“Most people who are openly critical of John McCain on this day will be accused of dancing on the grave of the dead. Instead, let's reflect on the lives of the millions of victims of wars for profit that people like McCain openly encouraged under false pretenses,” said Walt Peretto, a writer, researcher and political analyst in Washington.

“While the mainstream media praises and sugar-coats a man who craved wars for profit and impeded the official acknowledgement of peacemakers like Dr. Martin Luther King Jr. -- we all need to put this man's life into the proper perspective despite the incessant propaganda in the controlled media,” said in a phone intervie.

“McCain was a top dog who sacrificed his own military people to kill innocent men, women, and children around the world for decades in order to advance the agenda of organized psychopathic rule over all people and resources of the world,” he added.

After his election to the US Senate in 1987, representing the state of Arizona, McCain backed US military interventions, from the first Persian Gulf War in the early 1990s to the later US invasions of Iraq and Afghanistan.

In an appearance in South Carolina during his 2008 US presidential campaign, he responded to an audience question about military action against Iran by saying “[have you heard of] that old Beach Boys song, 'Bomb Iran'."

The senator was also a dedicated supporter of Israel and was quick to back US President Donald Trump's decision in May to move the US embassy in Israel from Tel Aviv to Jerusalem al-Quds.

"I have long believed that Jerusalem is the true capital of Israel," he wrote in a statement on his website after Trump’s announcement.

The support extended to Israel's numerous military campaigns against Palestinians, including the 2014 bombardment of Gaza, which killed more than 2,250 residents of the besieged territory.

The US media has also labeled him a "maverick" for his apparently independent positions, but he was also noted for his vicious temper, which spared few, even those close to him.

Tags: Hawkish John McCain US
Short Link rasanews.ir/201qGg
Share
0
Please type in your comments in English.
The comments that contain insults or libel to individuals, ethnicities, or contradictions with the laws of the country and religious teachings will not be disclosed