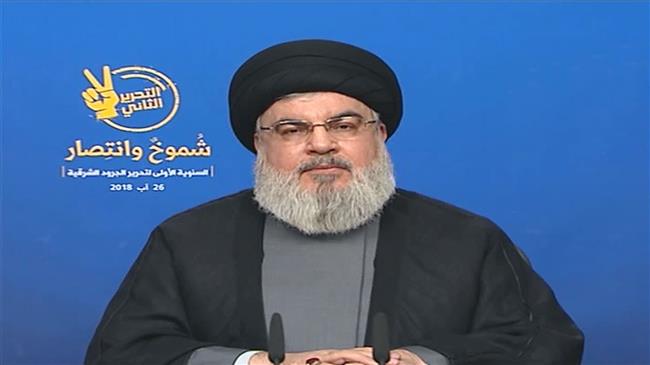 RNA - Addressing his supporters via a televised speech broadcast from the Lebanese capital city of Beirut on Sunday evening, Sayyed Hassan Nasrallah stated that even though Israel has greatly developed its arsenal and acquired state-of-the-art missiles and military hardware, it cannot yet escape defeat in any possible military confrontation.

“The Israeli army is incapable of recruiting a new generation of soldiers as the draftees lack any sense of motivation to fight. According to Israeli media reports, 44,000 Israeli soldiers sought help from psychiatrists last year. Israel cannot change the spirit of the defeat that is with its military personnel,” he pointed out.

Nasrallah then praised Lebanese youths for the outstanding courage they demonstrated in battles to purge the country’s border regions of Daesh Takfiri terrorists.

“Foreign media outlets are seeking to intimidate our nation by over-counting the number of our martyrs. Those who think they can overawe our people are delusional. We achieved full liberation of our border lands through sustained efforts made by Lebanese army soldiers and resistance fighters,” the Hezbollah chief commented.

Nasrallah underlined that the United States has always offered financial support and funneled weapons to Daesh militants, saying, “US forces intervened to stop Lebanese army from launching a military operation against Daesh in Joroud al-Jarajeer area (in western Qalamoun region). On one occasion, US military helicopters even airlifted Daesh commanders from an area in Syria, when the terrorists had been besieged.”

The Hezbollah secretary general noted that the US does not care at all about the interests of regional states in the Middle East, emphasizing that Washington never stands by its allies and simply views them as tools in order to attain its own goals.

According to Press TV, Nasrallah also warned against a false flag chemical attack in Syria's northern province of Idlib as a pretext for airstrikes against the Damascus government.

“While the West is looking for an excuse to launch a military aggression on Syria, it is turning a blind eye to the crimes being committed against Yemeni children. Nobody knows into what abyss [Saudi Crown Prince] Mohammed bin Salman is plunging Saudi Arabia and its nation,” he pointed out.

Turning to Lebanon’s internal affairs, Nasrallah stated that the inflammatory rhetoric against Hezbollah has intensified ever since parliamentary elections were held in Lebanon on May 6.

“The goal of the plot against Lebanon is to hold it responsible at all levels for the deteriorating situation in the country. We are modestly the largest party in Lebanon, but we have the least representation in the political arena. We bet on intra-Lebanese dialogue for the formation of the new government as the time is ticking away,” he concluded.

Tags: Nasrallah Hezbollah
Short Link rasanews.ir/201qGe
Share
0
Please type in your comments in English.
The comments that contain insults or libel to individuals, ethnicities, or contradictions with the laws of the country and religious teachings will not be disclosed