Rasa - At least 31 civilians, mostly children, have been killed after a Saudi-led airstrike hit their vehicle in Yemen’s Hudaydah province, only two weeks after a strike by the invading military coalition hit a school bus in the impoverished country and killed scores of Yemeni children. 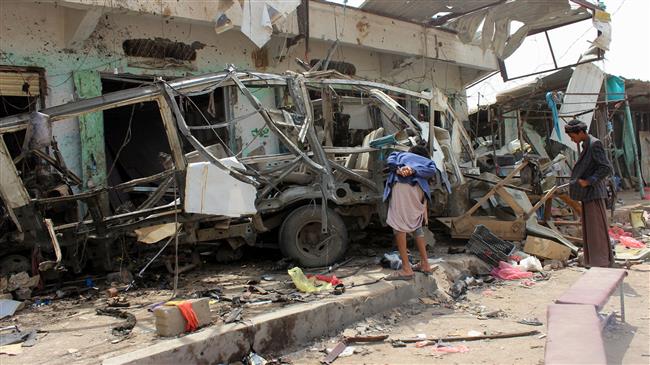 RNA - Yemen’s Arabic-language al-Masirah satellite television network, citing a spokesperson of the country’s Health Ministry, reported that all the victims, whose vehicle was also destroyed in the strike in Durayhimi city on Thursday, were internally displaced people.

Al-Masirah, citing local sources, had reported earlier that at least 22 children and four women lost their lives in the deadly strike, adding that all those on board the vehicle were killed.

Back on August 9, Saudi-led warplanes hit a school bus in the town of Dhahyan in Yemen’s northern province of Sa’ada with a 227-kilogram laser-guided Mark 82 bomb, killing a total of 51 people, among them 40 children, and leaving nearly 80 others wounded.

Later investigation by Yemeni authorities revealed that the bomb had been supplied by the US to the Saudi-led military coalition. Furthermore, a report by the CNN also confirmed what Yemeni authorities had announced about the origin of the bomb.

Yemen’s Ansarullah movement has condemned the attack, saying that the blood of children was spilt again before that of those killed in the bus attack was dried.

Later on Thursday, Yemen’s Ansarullah fighters announced that they had fired two Zelzal-1 short-range ballistic missile at Saudi forces’ positions in the kingdom’s Jizan province in retaliation for the Hudaydah attack, killing a number of them.

Saudi Arabia and some of its allies, including the United Arab Emirates, Morocco and Sudan, launched a brutal war, code-named Operation Decisive Storm, against Yemen in March 2015 in an attempt to reinstall Abd Rabbuh Mansur Hadi, Yemen’s former president and a staunch ally of Riyadh, and crush the popular Houthi Ansarullah movement.

The movement, which is a significant aid to the Yemeni army in defending the country against the invading forces, has been running state affairs in the absence of an effective administration during the past three years.

The imposed war initially consisted of a bombing campaign, but was later coupled with a naval blockade and the deployment of ground forces to Yemen.

The Saudi-led aggression has also taken a heavy toll on the country's infrastructure, destroying many hospitals, schools, and factories. The United Nations has said that a record 22.2 million Yemenis are in dire need of food, including 8.4 million threatened by severe hunger.

Tags: Yemen Saudi
Short Link rasanews.ir/201qFt
Share
0
Please type in your comments in English.
The comments that contain insults or libel to individuals, ethnicities, or contradictions with the laws of the country and religious teachings will not be disclosed