Rasa - A United Nations expert has railed against the US for re-imposition of sanctions on Iran, saying the “unjust” move lacks a lawful purpose. 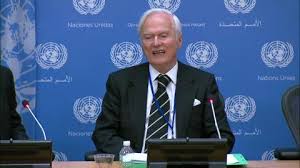 RNA - “The re-imposition of sanctions against Iran after the unilateral withdrawal of the United States from the Iran nuclear deal, which had been unanimously adopted by the Security Council with the support of the US itself, lays bare the illegitimacy of this action,” said UN Special Rapporteur Idriss Jazairy in a statement on Wednesday.

“This illegitimacy was confirmed by the opposition of all other permanent members of the Security Council and indeed of all international partners,” he added and noted such moves constituted a “wanton” attack on ordinary citizens as they lacked a lawful purpose and harmed “the human rights of ordinary citizens.”

“These unjust and harmful sanctions are destroying the economy and currency of Iran,” Jazairy stressed, warning the embargoes could risk the supply of medicines and even foodstuff as it makes it hard for Iran to provide them due to difficulties in imports and relevant payments.

The special rapporteur on the negative impact of the unilateral coercive measures also applauded efforts by the international community to reject the US economic bullying and said, “I am grateful for the efforts of the European Union in tackling this injustice, both through diplomatic efforts and through legislation to protect European companies from American sanctions.”

The expert highlighted the need for UN member states “to avoid the use of economic, political or other measures to coerce another state in regard to the exercise of its sovereign rights.”

US President Donald Trump said in May that it was withdrawing his country from a nuclear deal Iran signed with major world powers in 2015 in blatant breach of international regulations.

Trump also said he would reinstate US nuclear sanctions on Iran and impose "the highest level" of economic bans on the Islamic Republic.

Under the nuclear deal, known as the Joint Comprehensive Plan of Action, Iran undertook to put limits on its nuclear program in exchange for the removal of nuclear-related sanctions imposed against Tehran.

According to Press TV, the sanctions will cover Iran’s purchases of dollars, its trade in gold and precious metals, and its automotive sector. Further sanctions on oil and transactions with the Central Bank of Iran will come into effect in November.

Earlier this month, the European Union threatened to impose sanctions on companies that stop doing business with Iran in compliance with the US sanctions snapback mechanism.

Meanwhile, Iranian officials have also said that the country will not give in to US pressure and rejected any offer of talks with Washington under pressure and threats.

Tags: US Iran
Short Link rasanews.ir/201qFm
Share
0
Please type in your comments in English.
The comments that contain insults or libel to individuals, ethnicities, or contradictions with the laws of the country and religious teachings will not be disclosed