Rasa - Palestinian journalist Ali Dar Ali, who was recently detained by the Israeli military, had captured and shared live videos that showed the regime’s forces mapping a Palestinian’s house before demolishing it, according to new details. 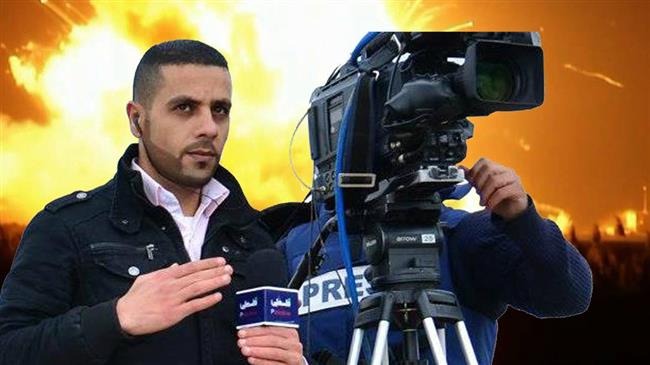 RNA - On the eve of his arrest on Wednesday, Dar Ali, a reporter with Palestine TV, had caught Israeli forces on camera mapping a Palestinian prisoner’s house in the al-Amari refugee camp near Ramallah, West Bank-- what they typically do before razing Palestinian homes, The Times of Israel reported.

The journalist livestreamed the Israeli military’s mapping operation on his Facebook page.

Only a day later, Dar Ali was arrested in a raid by Israeli forces in his hometown Burham, north of Ramallah.

The Times of Israel quoted an unnamed military official as saying that the journalist had been charged with “inciting violence” against the regime’s troops “while they were operating.”

The daily, however, said neither of the two videos livestreamed by Dar Ali contained any explicit call for violence against the regime’s forces.

An Israeli spokesman claimed the journalist had “systematically” published the videos.

Dar Ali is the seventh journalist in Palestine to be arrested by Israeli forces within the past two weeks.

The Tel Aviv regime has stepped up its crackdown on Palestinian journalists since late July, and has so far arrested both independent journalists and those working for al-Quds TV.

Some of these journalists have been released after undergoing one week of interrogation, but others are still in jail.

According to Wafa news agency, journalists freed from the Israeli prisons in recent weeks say military officials took “volumes of their work” to the interrogation sessions in order to provide justification for their imprisonment, using whatever they had ever said that could be described as incitement to violence.

Over the past months, Israeli forces have on several occasions been filmed brutally killing Palestinians or perpetrating other crimes against them, with the videos making headlines around the world and prompting harsh criticisms of the occupying regime.

Tel Aviv has thus been seeking a media blackout on the criminal acts of its soldiers, with Israeli cabinet ministers authorizing a contentious bill in mid-June that would criminalize the filming of certain military activities.

Under the proposed legislation, those found photographing, recording or filming Israeli troops “with the intention of undermining the spirit” of the army “shall be liable to five years imprisonment” and those “intending to harm” Israel’s security could be given 10 years in jail.

The bill, which has been widely censured as an attack on media freedom, needs several parliamentary votes to become law.

Tags: journalist Palestinian Israel
Short Link rasanews.ir/201qEp
Share
0
Please type in your comments in English.
The comments that contain insults or libel to individuals, ethnicities, or contradictions with the laws of the country and religious teachings will not be disclosed