Leaked: US wondering whether to call killing Rohingyas ‘genocide’

Rasa - The United States is still undecided whether to use the term “genocide” in reference to the systematic campaign of violence against Myanmar's Rohingya Muslims, a leaked document shows. 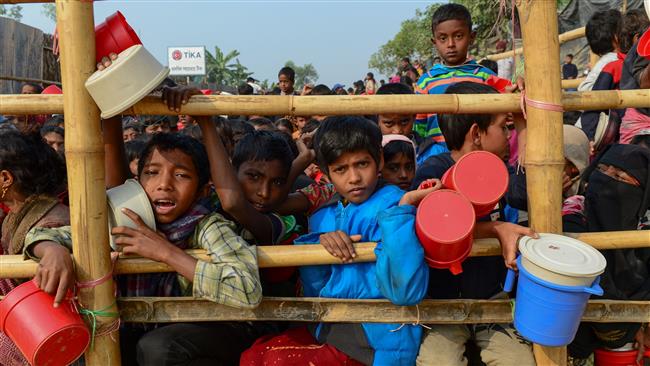 RNA - “Draft excerpts from a Pompeo statement obtained exclusively by POLITICO include the bracketed phrase “hold for determination” in a passage that will offer Pompeo’s conclusion about how to describe the vicious campaign against one of Myanmar’s most vulnerable ethnic minority groups’” read the POLITICO report on Monday.

The Rohingya Muslims based in Rakhine have been subjected to a campaign of killings, rape and arson attacks by the country’s majority Buddhist extremists in what the UN has described as “a textbook example of ethnic cleansing.”

This is while an intense debate reportedly continues in the White House over the term.

According to Press TV, Pompeo is expected to deliver a speech on the subject following a State Department investigation into the matter.

The department’s investigation has found that Myanmar’s military exhibited “premeditation and coordination” ahead of a slaughter of the minority group last year.

According to Press TV, Washington generally avoids using the term genocide in an attempt to bypass international law, requiring it to intervene.

On the other hand, the US tries to maintain good ties with the Myanmar government to keep China at bay.

The brutal campaign against the Muslims has forced some 700,000 people to flee their homeland since August 2017 and seek refuge elsewhere.

The Rohingya, who have lived in Myanmar for generations, are denied citizenship and are branded illegal immigrants from Bangladesh, which likewise denies them citizenship.

Tags: Rohingya Myanmar
Short Link rasanews.ir/201qEE
Share
0
Please type in your comments in English.
The comments that contain insults or libel to individuals, ethnicities, or contradictions with the laws of the country and religious teachings will not be disclosed