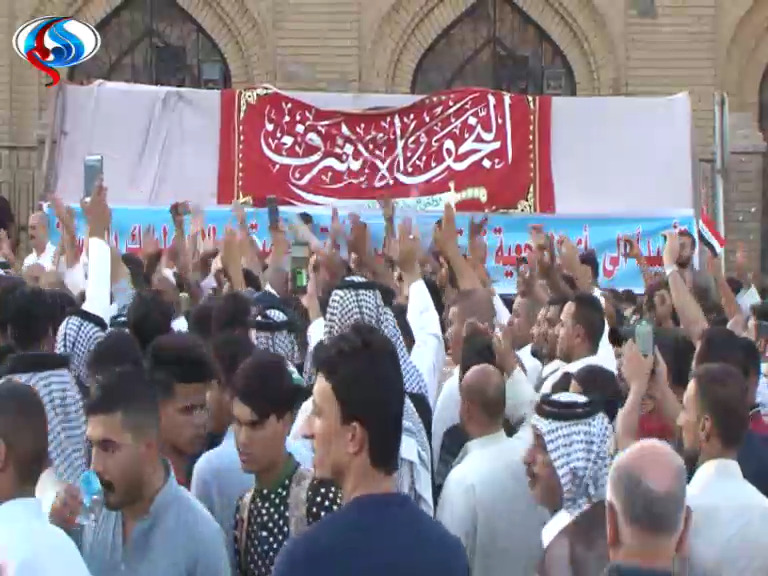 RNA – According to Rasa News Agency, Shaykh Mahdi al-Sumide’i, a senior Iraqi Sunni scholar, criticized Iraqi Prime Minister Haydar al-Abadi’s recent announcement of adherence to the United States’ hostile sanctions against the Islamic Republic of Iran.
The Grand Mufti of the Sunnis of Iraq emphasized that he would be the first defender of Iran and added, “We will never be satisfied that Iraq will have even an opinion on the persecution and discrimination of the people of the region.”
He strongly criticized the anti-Iran sanctions and in regard to the those Arab regimes that co-operated with the United States against the Iranian people, he said, “They are not even at the level of Zuhayr ibn Amer, who was a non-believer who opposed the siege by the Quraysh tribes against the Muslim community at the dawn of Islam.”

Shaykh al-Sumide’i announced he was amazed at the pride of the Arab regimes allied with the United States and their delight in regard to the slaughtering of the Muslims of Iran.

He insisted on the necessity of supporting Iran and the prohibition on supporting the American sanctions against the country.

Shaykh Jalaluddin al-Saghir, one of the leaders of the Islamic Supreme Council of Iraq, also strongly criticized al-Abadi’s statement about adherence to the United States’ anti-Iran sanctions.
Ayatollah Sayyid Muhammad-Taqi al-Modarresi, a senior Iraqi source of emulation, also praised the attempts to overcome the differences between the Iraqi and Iranian peoples.

He stressed that the Iraqi peoples’ ties to their brothers are stronger than all the conspiracies and they won’t forget what the Iranian people did to assist them “during the days of great tribulation” in the fight to defeat the terrorists and support the economy in the darkest circumstances.

Ayatollah Bashir al-Najafi, who participated in the demonstrations held in the holy city of Najaf, also added, “This is unjust behaviour and the United States, like its rotten fangs, imposed a siege on the Iranian people.”

On August 8, Prime Minister al-Abadi said he didn’t agree with the renewed American sanctions on Iran but added he will abide by them to protect his country’s interests and risk retaliatory actions by Washington.

“Can I, the prime minister of Iraq, endanger the interests of Iraqis just to take a stand?” he said, “We don’t sympathize with the sanctions, we don’t think they are appropriate, and we don’t interact with them, but we are committed to protect our people.”

“We consider them a strategic mistake and incorrect, but we will abide by them to protect the interests of our people,” he said.

Given Iran’s immediate and unconditional support for Iraq after the rise of the Daesh terrorist group in northern Iraq in 2014, compared with that of the delayed and conditional support of the United States, this statement led to the anger and grievance among Iraqi political and religious figures as well as public opinion in the war-torn Arab country.

In Najaf, hundreds of people gathered in 1920 Revolution Square, asserting that the Iraqi people are not affiliated with the United States, and that the Iraqis don’t agree with the decision of al-Abadi.

The demonstrators praised Tehran’s support for Iraq and its rejection of the Western sanctions in the 1990s, stressing that the Iraqi people would not abandon Iran and reject the American sanctions.

“We will not be part of the injustice and sanctions on the Islamic Republic of Iran,” one of the demonstrators said.