Rasa - It’s an insult to intelligence. Saudi Arabia says it wants to carry out an investigation following Thursday’s attack in the Saada province. In the strike, Saudi warplanes attacked a school bus outside of a crowded marketplace, killing at least 50, mostly children. 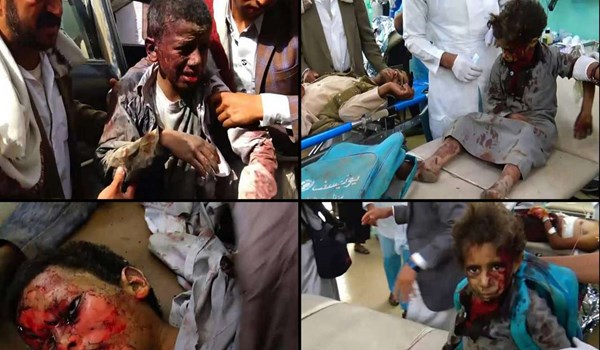 RNA - Past experiences tell us where this farce is actually going. Saudi officials claim that the killings were a “legitimate military action” and perfectly legal. Gory photos of dead children that followed, however, have fueled a lot of calls from the international community to independently investigate the matter. UN Secretary-General Antonio Gutterres has condemned the strike and urged an “independent and prompt investigation.”

In any event, an international probe needs to happen to prevent a similar human rights nightmare. The UN should stop Saudi Arabia from keeping the world body from issuing any critical statements, and the US should be stopped from preventing the UN Security Council from backing anything on Yemen that the Saudis would object to. Further still, the US and Britain are front and center responsible for the carnage and extreme affliction in Yemen. They are complicit in the ongoing aggression as they supply the Riyadh regime with advanced weaponry and military equipment as well as diplomatic, logistical and intelligence assistance.

In the past, the UN has simply allowed the Saudis to investigate themselves with full US diplomatic support at the Security Council. This is a joke and it has to stop too, because the Saudis insist that the August 9 killing of school children and market traders was a “legitimate military action.” There is no way a credible and transparent investigation into the recent airstrike by the Saudis can be launched.

Lest we also forget, the imposed war consists of a bombing campaign that is coupled with a naval blockade and the deployment of ground forces into Yemen. Over 17,000 Yemenis have been killed and thousands more injured since the onset of the Saudi-led aggression. what's more, even US government officials have been unable to justify this modern version of atrocity and barbarism.

According to Fars News Agancy, the US-backed aggression has also taken a heavy toll on the country's infrastructure, destroying many hospitals, schools, and factories. The UN should force the Saudis to lift the illegal blockade because a record 22.2 million Yemenis are in dire need of food, including 8.4 million threatened by severe hunger.

This is a time for civility. The US-backed, Saudi-led indiscriminate air strikes are calls for genocide, and must be treated as such. The Yemenis will never be bludgeoned into complete submission and allow the Saudi-led coalition exert control over their country’s resources, including oil reserves, natural gas, minerals, and strategic location.

They will continue to resist the US-backed military aggression. At the same time, they expect the international community to hold the Saudis and their allies to account. The United States is particularly deeply implicated in the appalling carnage. It is the UN’s responsibility to do what it can to demand an end to this complicity as well.

Together with the Saudis, the Americans are still focused on keeping the lucrative war unending, which has only meant protecting the illicit interests of the Military-Industrial Complex and NATO partners. The UN should ask everyone who is part of the international civil society not let their inaction and silence overcome their civility and responsibility. The UN member states know all too well: The call for international action and civility, for seeking the truth, and for indicting the offenders and bringing them before a court is a call for International Law governance.

Tags: US Yemen UN Saudi
Short Link rasanews.ir/201qDZ
Share
0
Please type in your comments in English.
The comments that contain insults or libel to individuals, ethnicities, or contradictions with the laws of the country and religious teachings will not be disclosed