Rasa - Daesh Takfiri terrorists have killed five members of a family at a checkpoint in Iraq’s north-central province of Salahuddin as army troopers, backed by pro-government fighters from the Popular Mobilization Units, are trying to flush the last remnants of the extremist outfit out of the crisis-hit Arab country. 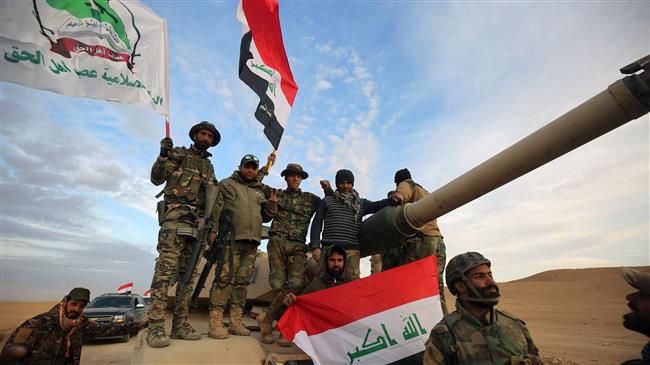 RNA - “A group of Daesh fighters came from the Hamrin Mountains, crossed the Tigris River after midnight and attacked the checkpoint at the entrance to the village of Albu Juwari, north of Baiji,” a police official, speaking on condition of anonymity, said on Saturday.

He added that five members of the family were killed in the assault, while a sixth is in a critical condition.

All were members of a tribal force operating under the umbrella of the Popular Mobilization Units – better known by the Arabic name Hashd al-Sha’abi.

The source said Mohammed Khalaf al-Jabouri was captured at a checkpoint between Makhmur town and the major Kurdish city of Erbil, which is located approximately 350 kilometers north of the capital Baghdad.

Separately, Abdul Sattar al-Biraqdar, spokesman for Iraq's Supreme Judicial Council, said in a statement on Thursday that a Baghdad court had sentenced two Iraqi nationals to death and another to life imprisonment over their membership in Daesh and involvement in acts of terrorism.

The trio confessed to having fought against security and military forces in Nineveh and Anbar provinces. They then fled to Syria after the two provinces were liberated, before being arrested by Syrian forces and turned over to Iraqi officials.

On June 30, Iraqi Prime Minister Haider al-Abadi, who is also the commander-in-chief of Iraqi forces, pledged to hunt down Daesh militants across Iraq after a series of attacks and abductions carried out by the terrorist group.

“We will chase the remaining cells of terrorism in their hideouts and we will kill them, we will chase them everywhere, in the mountains and the desert,” Abadi said.

According to Press TV, Abadi declared the end of military operations against Daesh in the Arab country on December 9, 2017.

On July 10 that year, the Iraqi prime minister had formally declared victory over Daesh extremists in Mosul, which served as the terrorists’ main urban stronghold in the conflict-ridden Arab country.

Tags: Hashd DAESH Takfiri Iraq
Short Link rasanews.ir/201qDW
Share
0
Please type in your comments in English.
The comments that contain insults or libel to individuals, ethnicities, or contradictions with the laws of the country and religious teachings will not be disclosed