Rasa - The United Nations Security Council (UNSC) has called for launching a "credible and transparent" investigation into a recent airstrike by the Saudi-led military coalition that killed dozens of school children in northern Yemen. 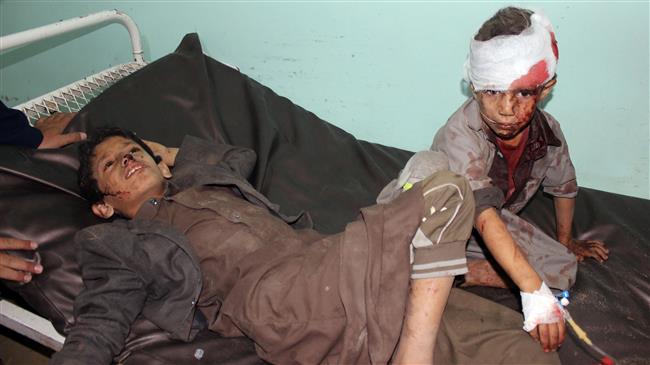 RNA - The call was made during a closed-door Security Council meeting on Friday, a day after Saudi-led warplanes attacked a school bus in a market, killing at least 50 civilians, mainly school children, and wounding 77 others in Yemen’s northwestern province of Sa’ada.

“They expressed their grave concern at these, and all other recent attacks in Yemen. They called for a credible and transparent investigation,” British UN Ambassador Karen Pierce, council president for August, said after a senior UN official briefed the 15-member council on the brutal strike.

Pierce added that the council "will now consult with the UN and others as to how the investigation can best be taken forward."

These children were slaughtered travelling back to school after a picnic.
It is the latest atrocity in the Saudi-led war in Yemen, armed and backed by the UK government.
UK support for this conflict, and the humanitarian crisis it's unleashed, must end.https://t.co/XgNOzW9HfN
— Jeremy Corbyn (@jeremycorbyn) August 10, 2018

A few hours after that attack, UN Secretary General António Guterres denounced the deadly aerial aggression and called for an independent investigation into the case.

The Saudi-led coalition, in a defiant statement, has described the massacre as a “legitimate action” to target missile launchers used by Houthi Ansarullah fighters to target the southern Saudi city of Jizan.

The humanitarian crisis in #Yemen is dire. In the last week, airstrikes & bombing have killed nearly 50 people, including dozens of children on a bus. We urge both sides to stop the violence. Add your voice & ask Jeremy Hunt to demand a ceasefire NOW at https://t.co/pF6hjlD2Z2 pic.twitter.com/GZVlzCVEi4
— Oxfam (@oxfamgb) August 10, 2018

Saudi Arabia and some of its allies launched a brutal war, code-named Operation Decisive Storm, against Yemen in March 2015 in an attempt to reinstall Yemen’s former president, Abd Rabbuh Mansur Hadi, a staunch ally of Riyadh, and crush the Houthi Ansarullah movement, which is a significant aid to the Yemeni army in defending the country against the invading forces. It has also been running state affairs in the absence of an effective administration during the past three years.

According to Press TV, the imposed war initially consisted of a bombing campaign but was later coupled with a naval blockade and the deployment of ground forces into Yemen.

The Saudi-led aggression has also taken a heavy toll on the country's infrastructure, destroying many hospitals, schools, and factories. The United Nations has already said that a record 22.2 million Yemenis are in dire need of food, including 8.4 million threatened by severe hunger.

Tags: Yemen UNSC Saudi
Short Link rasanews.ir/201qDK
Share
0
Please type in your comments in English.
The comments that contain insults or libel to individuals, ethnicities, or contradictions with the laws of the country and religious teachings will not be disclosed