US putting unprecedented pressure on Iran to ‘change its behavior’: Bolton

Rasa - US President Donald Trump’s National Security Adviser John Bolton has said the United States is exerting “unprecedented pressure on the government of Iran to change its behavior.” 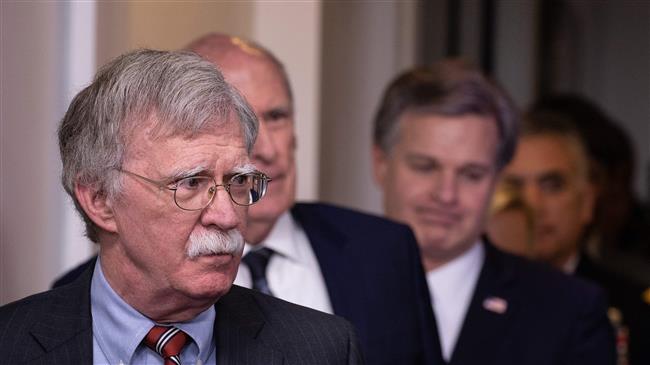 RNA - Bolton made the remarks in an interview with Fox News on Monday, shortly after Trump signed an executive order reimposing many sanctions on Iran to levy "maximum economic pressure" on the Islamic Republic.

Bolton claimed that the Trump administration is not attempting to change the government in Iran.

"Our policy is not regime change," he said. "We want to put unprecedented pressure on the government of Iran to change its behavior. And, so far, they've shown no indication they're prepared to do that."

While signing the executive order, Trump repeated his opinion that the international nuclear agreement with Iran, known as the Joint Comprehensive Plan of Action (JCPOA), was a "horrible, one-sided deal."

The US sanctions on Iran came into effect at 12:01 a.m. Tuesday, according to local time in Washington, DC.

Bolton accused Iran of trying to produce nuclear weapons and supporting terrorism and said the United States is attempting to stop this.

"What we're focused on is the nuclear weapons program, ballistic missiles, the support for terrorism, and the belligerent activity militarily," he said.

Bolton's anti-Iran rhetoric comes as the longstanding Western dispute over Tehran's nuclear program was settled after the conclusion of the landmark nuclear agreement in 2015. UN Security Council Resolution 2231 also endorsed the nuclear deal, which went into effect in January 2016.

The International Atomic Energy Agency (IAEA) has also confirmed Iran's commitment to the terms of the nuclear agreement.

According to Press TV, Iran and the five permanent members of the United Nations Security Council -- the United States, France, Britain, Russia and China -- plus Germany started implementing the JCPOA on January 16, 2016.

In May, Washington withdrew from the deal. It also said it would be returning the nuclear-related sanctions, which have been lifted on the back of the accord.

The second wave of sanctions that would hit on November 4 would aim to bring Iran’s oil exports to zero as claimed by US officials.

The Leader of the Islamic Revolution Ayatollah Seyyed Ali Khamenei has ordered officials and institutions in charge to prepare to build up the country’s enrichment capacity in case the nuclear deal falls apart after the US unilaterally scrapped it.

On Monday, Iranian President Hassan Rouhani said the Trump administration is no more able to prove its trustworthiness for any negotiations after its withdrawal from the Iran nuclear deal and a number of other international treaties.

Tags: Bolton US United States
Short Link rasanews.ir/201qCR
Share
0
Please type in your comments in English.
The comments that contain insults or libel to individuals, ethnicities, or contradictions with the laws of the country and religious teachings will not be disclosed