Rasa - Opposition to a newly-adopted apartheid law that calls Israel “the exclusive nation-state of the Jewish people” has grown to include Arab and Druze minority groups as well as the Christian community in the occupied territories. 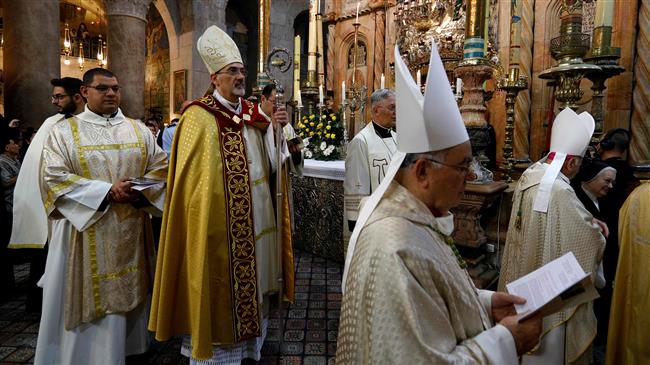 RNA - On Sunday, the Catholic Church in the occupied city of Jerusalem al-Quds condemned the “nation-state” law that cleared the Israeli parliament on July 19, The Times of Israelreported.

The Latin Patriarchate, which represents the Roman Catholic Church, said in a statement, “The law fails to provide any constitutional guarantees for the rights of the indigenous and other minorities living in the country.”

“Palestinian citizens of Israel, constituting 20 percent are flagrantly excluded from the law,” it added, citing an example.

“It is beyond conception that a law with constitutional effect ignores an entire segment of the population as if its members never existed,” the church said.  “It sends an unequivocal signal to the Palestinian citizens of Israel, to the effect that in this country they are not at home.”

The legislation also violated international laws, the church said, calling on Christians to rise in protest against the legislation.

On Sunday, hundreds of Arabs and Israelis protested the law in the port city of Haifa.

The protest was joined by several lawmakers, who lashed out against the legislation, with outspoken Arab legislator Aida Touma-Sliman calling it “an Apartheid law.”

The law prioritizes “Jewish” values over democratic ones, declares al-Quds the “capital” of Israel, and sets Hebrew as the official language, relegating Arabic from an official language to one with “special status.”

Also on Sunday, Druze leaders met with Israeli Prime Minister Benjamin Netanyahu and President Reuven Rivlin to voice their unease at the issue.

Last week, Druze leaders, including three Knesset members, filed a petition with the Israeli High Court of Justice against the legislation, calling it an “extreme” act.

Separately, a commander with the community, whose members are subject to mandatory draft into the Israeli military, resigned in protest at the law.

He called on the Druze to end their youths’ service in the military, and warned that the Israeli military will suffer greatly as a consequence of the law.

According to Press TV, in an open letter to Netanyahu, Capt. Amir Jmall wrote, “This morning, when I woke up to drive to the [army] base, I asked myself, why?”

“After many thoughts ran through my head, I decided to let go and to discontinue serving the country, a country that has a government that takes and does not give back,” he wrote.

“Continue serving the country? I do not want to continue and I am sure that hundreds more people will stop serving and will be discharged from the army following your decision, Netanyahu, that of you and your government,” he continued.

Tags: Druze Israel Jewish
Short Link rasanews.ir/201qB2
Share
0
Please type in your comments in English.
The comments that contain insults or libel to individuals, ethnicities, or contradictions with the laws of the country and religious teachings will not be disclosed