‘Arab complicity’ to blame for US embassy move: Hezbollah

Rasa - The Lebanese resistance movement of Hezbollah says Washington’s decision to set the date for moving its embassy from Tel Aviv to occupied Jerusalem al-Quds is the result of “complicity” among Arab nations and a step towards eradicating the Palestinian cause. 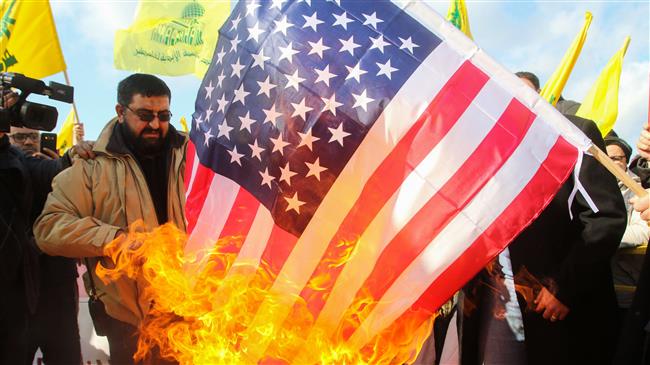 RNA - “It is certain that this Arab complicity encouraged the US administration to speedily implement its decision to move its embassy to al-Quds,” Hezbollah said in a statement issued on Monday.

The projected embassy opening on May 17 would coincide with the 70th anniversary of Nakba Day (Day of Catastrophe), which marks the forcible eviction of hundreds of thousands of Palestinians from their homeland by Israelis in 1948.

The Lebanese resistance movement said the US decision proved disregard for the Arab world and all Muslims as well as the international community, and called for firm response to the controversial move.

“The resistance and intifada (uprising) are the fruitful way to regain the occupied territories and all the sanctities,” Hezbollah noted.

US President Donald Trump on December 6, 2017 defied global warnings and said Washington formally recognized Jerusalem al-Quds as the capital of Israel and would begin the process of moving its embassy to the occupied city, breaking with decades of American policy.

His decision infuriated Palestinians, who declared that Washington could no longer play a role as lead mediator in the Middle East peace process. It also sparked outrage across the Muslim world and even Washington's Arab allies.

The United Nations General Assembly on December 21, 2017 overwhelmingly voted in favor of a resolution that calls on the US to withdraw its controversial recognition of Jerusalem al-Quds as the Israeli capital.

The 193-nation assembly adopted the resolution by a decisive vote of 128 to 9, with 35 abstentions.

According to Press TV, the scheduled opening of the US embassy in May appears to represent an earlier time frame than what had been expected.

During an address to the Israeli Knesset (parliament) on January 22, US Vice President Mike Pence said Washington was planning to relocate the country’s embassy in Israel from Tel Aviv to Jerusalem al-Quds “by the end” of 2019.

Israel lays claim to the entirety of Jerusalem al-Quds as its “capital” while Palestinians want its eastern part as the capital of a future state for themselves.

Palestinian leaders have warned that the potential relocation would fuel strong reaction in the region and deliver a death blow to any prospect of resolving the Israeli-Palestinian conflict.

Tags: Israel Hezbollah
Short Link rasanews.ir/201paG
Share
0
Please type in your comments in English.
The comments that contain insults or libel to individuals, ethnicities, or contradictions with the laws of the country and religious teachings will not be disclosed