Rasa - Israeli forces attacked Palestinians who rallied in multiple locations along Gaza borders on the 12th 'Friday of Rage’ to protest US decision on Jerusalem as capital of Israel, leaving several protesters with bullet wounds, while many others suffocated by tear gas, according to sources. 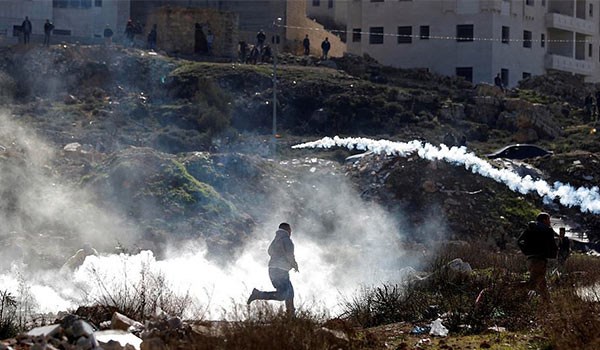 RNA - Forces stationed at military watchtowers along Gaza borders with Israel to the East of Gaza city opened live fire at protesters who approached the border fence, shooting and injuring at least five demonstrators, WAFA reported.

Similar clashes were witnessed to the East of Jabalia town, North of the strip. Forces stationed along the borders fired live bullets at demonstrators, shooting and injuring at least eight people.

Meanwhile, at least three youth were shot and injured by Israeli snipers’ live bullets during clashes that erupted to the East of Khan Younis city, South of the strip. Several others suffocated due to tear gas inhalation.

Clashes were also witnessed to the East of al-Bureij refugee camp, in central Gaza, as well as near Beit Hanoun border crossing, North of the strip. No injuries were reported.

All cases were transferred to hospital for medical treatment, where their conditions were described as moderate.

At least three Palestinians, including a minor, were also shot and injured on Friday as Israeli forces quelled the weekly and peaceful anti-settlement demonstration in the village of Kufr Qaddoum to the East of Qalqilya, according to a local activist.

Tags: Palestinian Israel
Short Link rasanews.ir/201pZc
Share
0
Please type in your comments in English.
The comments that contain insults or libel to individuals, ethnicities, or contradictions with the laws of the country and religious teachings will not be disclosed