Rasa - New satellite imagery shows that the government of Myanmar is bulldozing more than dozens of already-burned-out Rohingya Muslim villages in the west of the country in an attempt to destroy evidence of violence committed by the military, rights groups say. 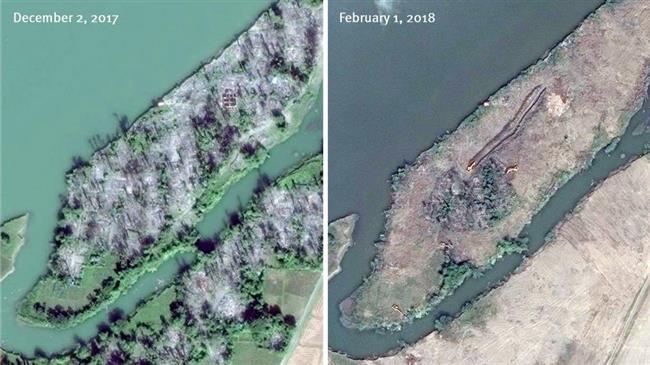 RNA - Satellite imagery from Colorado-based DigitalGlobe that were handed to the Associated Press on Friday showed that at least 28 depopulated villages had been leveled by bulldozers and other machinery in a 50-kilometer radius around the town of Maungdaw in western Rakhine State between December 2017 and February this year.

Citing human rights groups, the AP said authorities were destroying “crime scenes” that contained evidence of the atrocities committed by the military against the minority Rohingya Muslim community — including rape, torture, and murder.

Human Rights Watch (HRW) also released a similar analysis on Friday, saying the Myanmarese government had cleared at least 55 villages by heavy machinery since late 2017. At least two of the flattened villages had been previously undamaged by fires, the HRW said.

“Many of these villages were scenes of atrocities against Rohingya and should be preserved so that the experts appointed by the UN to document these abuses can properly evaluate the evidence to identify those responsible,” said Brad Adams, the Asia director of the HRW. “Bulldozing these areas threatens to erase both the memory and the legal claims of the Rohingya who lived there.”

A rights monitoring group said earlier this week that the government appeared to be destroying the villages to demolish the site of mass graves in Rohingya villages.

The Arakan Project, a human rights organization documenting the atrocities against the Rohingya community, earlier this week provided The Guardian with a video of a mass grave site before its destruction.

The group’s director Chris Lewa said the bulldozing appeared to be part of the government’s attempts to destroy evidence of the grave permanently.

“Two of the mass graves sites we know about have appeared in the media, but on Thursday one of the other mass grave sites was bulldozed. This means that evidence of the killings is being destroyed,” Lewa said.

The government denies the charges, saying it is simply trying to rebuild the devastated region. It has also so far denied charges of massacre and ethnic cleansing of the Muslims as well.

Thousand of Rohingya Muslims have been killed in a military crackdown that began in late 2016 and intensified in August 2017. Nearly 700,000 Rohingya have also escaped to neighboring Bangladesh since August last year.

In its annual report, Amnesty International blamed the massacres of Rohingya Muslims on the society that, according to the group, is encouraged by the “hate-filled rhetoric” of its leaders.

“We saw the ultimate consequence of a society encouraged to hate, scapegoat, and fear minorities laid bare in the horrific military campaign of ethnic cleansing against the Rohingya people in Myanmar,” said Salil Shetty, the secretary general of Amnesty.

The group also criticized the international community for failing to respond robustly to “crimes against humanity and war crimes” in Myanmar.

Meanwhile, the European Union is preparing sanctions against Myanmar’s military over the killings of Rohingya people.

According to an EU diplomat, European foreign ministers will call on EU foreign policy Chief Federica Mogherini “to propose restrictive measures on senior members of the Myanmar military for systematic human rights abuses, without delay.”

They will also ask Mogherini on Monday to look at ways to strengthen the EU’s 1990s-era arms embargo on Myanmar that remains in place.

In a statement expected to be release on Monday at a regular gathering of EU foreign ministers, the EU is also expected to reiterate its call for the release of Reuters’ reporters Wa Lone and Kyaw Soe Oo, detained on December 12 last year because of their coverage a massacre of the Rohingya.

Earlier this year, the two were officially charged for breaching a colonial-era law. The charges brought against them could carry a penalty of up to 14 years in prison.

The United Nations children’s agency, UNICEF, warned on Friday about the condition of more than 720,000 Rohingya children who are facing a threat of violence in Myanmar as well as those who are living in “a very difficult situation” in unsanitary and overcrowded camps in Bangladesh.

“Some 720,000 Rohingya children are essentially trapped — either hemmed in by violence and forced displacement inside Myanmar or stranded in overcrowded camps in Bangladesh because they can’t return home,” said UNICEF Director of Emergency Programs Manuel Fontaine.

“This is a crisis without a quick fix that could take years to resolve unless there is a concerted effort to address its root causes,” he said.

According to Press TV, there are around 534,000 Rohingya children living in a “very difficult situation” in camps in Bangladesh’s Cox’s Bazar, which are now expected to get even worse as the cyclone season, with heavy tropical rains, approaches.

“Actually, if there is a bad cyclone passing through the camp, which became the fourth biggest town, a slum town of Bangladesh, we may have then a real situation to face,” UNICEF’s representative Edouard Beigbeder said in Geneva.

The cyclone season, which will bring heavy rain and high wind from March through July, is feared to cause another humanitarian crisis, including disease, flooding, landslides, and further displacement for those in camps along the Bangladesh-Myanmar border.

Tags: Rohingya Myanmar
Short Link rasanews.ir/201pZT
Share
0
Please type in your comments in English.
The comments that contain insults or libel to individuals, ethnicities, or contradictions with the laws of the country and religious teachings will not be disclosed