Rasa -Thousands of African migrants have staged a protest outside the Rwandan Embassy in Israel against a “racist” Israeli plan to deport them to the African country. 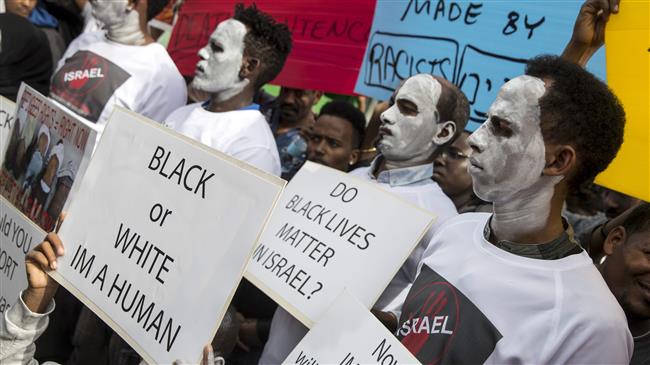 RNA - During the Wednesday protest, the demonstrators urged Rwanda and its President Paul Kagame not to cooperate with Israel on the plan.

"Kagame — We are not for sale," said one banner held by the demonstrators. "Prison or Deportation? What would you choose?" said another.

Earlier in January, Israel started the implementation of a plan to deport nearly 38,000 migrants who had entered the occupied territories, mainly Eritreans and Sudanese, threatening to detain those who refuse to leave. The refugees say they fled from danger at home.

Under the first stage of deportations, Israeli officials on Sunday began notifying "between 15,000 and 20,000” African men that they have until the end of March to leave the occupied territories or face jail. The migrants will reportedly be deported to Rwanda or Uganda, according to testimonies of people who have already left as well as aid workers.

The protesters also denounced the plan as "racist," carrying banners reading, "Would you deport me if I was white?"

The migrants said they did not want to settle in the occupied territories, but wanted to remain as refugees until it was safe for them to return to their countries.

"Deportation kills," the protesters chanted. "We are not criminals. We are refugees," they said.

They said the plan would put them in danger. The asylum seekers and their supporters say those who have left have run into danger in Rwanda and Uganda. They say those people have no rights in the two countries.

The plan, initially approved by the Israeli cabinet in November, has drawn concerns from the UN refugee agency, which called it incoherent and unsafe.

Tags: Racist Israel
Short Link rasanews.ir/201pVI
Share
0
Please type in your comments in English.
The comments that contain insults or libel to individuals, ethnicities, or contradictions with the laws of the country and religious teachings will not be disclosed