Rasa - The United States wants to maintain a permanent military presence in Syria “to block what they see as an Iranian advance on through Iraq, Syria and over to Lebanon,” says James Jatras, a former American Senate foreign policy adviser. 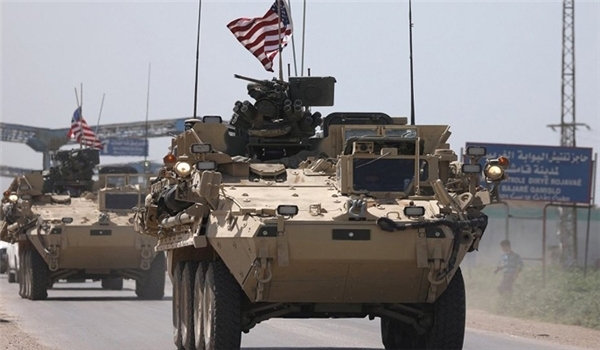 RNA - Jatras made the remarks in an interview on Friday while commenting on reports which claim that the United States is considering carrying out a military strike in Syria.

Senior US officials have claimed President Donald Trump is prepared to launch a military action if necessary against the Syrian government which they say is possibly developing new types of chemical weapons.

The officials on Thursday said the government of Syrian Bashar al-Assad saved a part of chemical weapons stockpile despite a US-Russian deal under which Damascus had agreed to hand over all such weapons for destruction.

The government surrendered its stockpiles of chemical weapons in 2014 to a joint mission led by the UN and the Organization for the Prohibition of Chemical Weapons (OPCW), which oversaw the destruction of the weaponry. The deal was negotiated by Russia and the United States.

The officials, speaking on condition of anonymity, told reporters in Washington, DC, that Syrian armed forces "evolved" their chemical weapons and made continued occasional use of them in smaller amounts since April 2017. But they declined to provide specific details.

More than 80 people died in the April 4, 2017 sarin gas attack on Khan Shaykhun in Idlib Province. Following the incident, the US military launched a missile strike on a Syrian air base.

“I can’t confirm any reports that the United States government is considering a move against Syria on allegations of chemical weapons. But it’s not entirely surprising,” Jatras told.

“Donald Trump said that he was in Syria to defeat Daesh, and that was it. However, it’s quite clear that the National Security team around him has other goals. They’re still stuck in this ‘Assad must go’ notion from the previous administration,” he added.

“They also want to make it a permanent presence in Syria to block what they see as an Iranian advance on through Iraq, Syria and over to Lebanon,” the analyst noted.

“This is a very dangerous development. And I think it’s fundamentally against the policies of Trump promised when he ran for office. But this is now what we have and it’s very, very disturbing and very dangerous,” he concluded.

The United States and its regional allies have been training and funding terrorists for several years who have destabilized Iraq and Syria, whereas Iran has helped the governments of these countries in their fight against the foreign-sponsored elements.

Tags: US Iran Syria
Short Link rasanews.ir/201pUG
Share
0
Please type in your comments in English.
The comments that contain insults or libel to individuals, ethnicities, or contradictions with the laws of the country and religious teachings will not be disclosed