UK ‘proud’ of Balfour declaration that led to creation of Israel

Rasa - UK Foreign Minister Boris Johnson says he is “proud” to be sitting in the same room in which his predecessor penned the Balfour declaration, a document that paved the way for the creation of Israel. 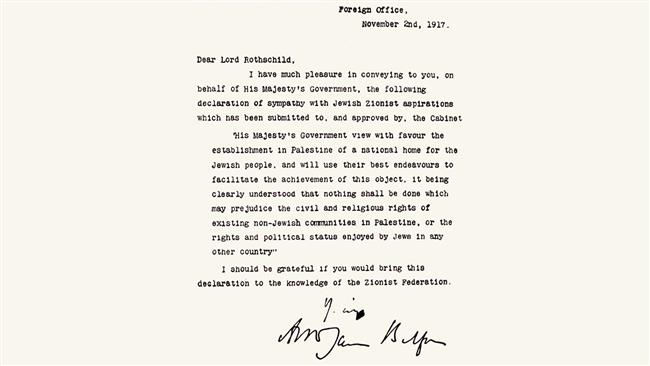 RNA - Johnson wrote in an article published by The Telegraph on Sunday that the 1917 public declaration by Arthur James Balfour was “indispensable” to Israel’s creation and London was proud to mark its 100-year anniversary later this week.

"I am proud of Britain's part in creating Israel and Her Majesty’s Government will mark the Centenary of the Balfour Declaration on Thursday in that spirit,” he wrote.

Israeli Prime Minister Benjamin Netanyahu is due in London to attend the anniversary of the celebration.

Last week, UK Prime Minister Theresa May made similar comments about the document, pledging to mark the document’s centenary “with pride.”

Britain’s insistence on celebrating the document has drawn criticism from Palestine, which has repeatedly called on the UK government to apologize for its role in the establishment of Israel.

Nabil Shaath, an aide to Palestinian President Mahmoud Abbas, said during an interview with Lebanon’s al-Mayadeen network on Thursday that Palestine was planning to take legal action against the UK for triggering a chain reaction that led to the displacement of millions of Palestinians.

Abbas had earlier threatened the UK with a lawsuit in case it refused to call off celebratory events linked with the Balfour declaration.

There is a consensus that Israel has been in violation of a key caveat of the declaration, which states that “nothing shall be done which may prejudice the civil and religious rights of existing non-Jewish communities.”

In his article, Johnson acknowledged “the suffering of those affected and dislodged” by Israel’s birth, saying that the vital caveat “has not been fully realized.”

Labour Party leader Jeremy Corbyn has announced that he would skip the November 2 celebrations.

Besides a major protest in London during the first week of November, protesters are planning to gather outside the UK embassy in Tel Aviv on November 7. Similar events are also planned across the West Bank as well as the Gaza Strip.

Tags: Balfour Declaration Israel UK
Short Link rasanews.ir/201p1u
Share
0
Please type in your comments in English.
The comments that contain insults or libel to individuals, ethnicities, or contradictions with the laws of the country and religious teachings will not be disclosed