Rasa - According to a top-secret National Security Agency document provided by whistleblower Edward Snowden, the ongoing violence and war on Syria was directly ordered by Saudi Arabia, more specifically, a member of the royal family, Prince Salman bin Sultan, to help the Free Syrian Army affect regime change in Damascus. 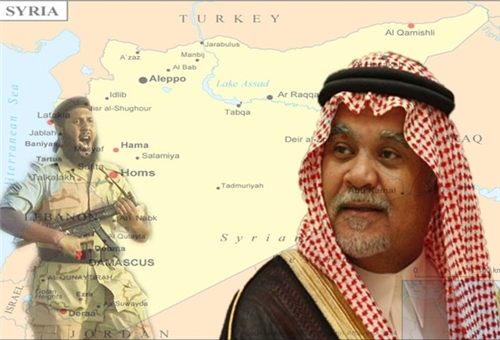 RNA - The document reveals that Saudi Arabia helped terrorists under the banner of the Free Syrian Army to set up positions on March 18, 2013 to target the presidential palace and fire barrages of rockets at targets in the heart of Damascus, mainly Damascus International Airport and a government security compound. Other revelations include Salman providing 120 tons of explosives and other weaponry to opposition forces, giving them instructions to “light up Damascus” and “flatten” the airport.

The NSA document provides a glimpse into how the dirty war on Syria evolved from its early stages. By the time of the March 2013 attack, arguably the most salient dynamic in the conflict was the foreign powers, including the United States and Saudi Arabia fueling a bloody, entrenched stalemate. The document points to how deeply these regime changers would become involved in major parts of the conflict, even choosing specific operations for their terrorist proxies to carry out.

The document further provides a concrete example of the role that Riyadh, Washington and outside sponsors played in the day-to-day reality of the conflict, including aiding and abetting various terrorist groups such as ISIL, Al-Qaeda and their offshoots to deliberately target civilians.

However, we all knew long before these new revelations that foreign sponsors were indeed providing arms to terrorist groups fighting the Syrian government. We also knew that the flow of foreign-sponsored arms was a development that would contribute to the fracturing of the opposition, inevitably aligning them with ISIL and Al-Qaeda over years of grinding warfare.

Moreover, it has been firmly established that terrorist organizations like ISIL and Al-Qaeda benefitted from direct Saudi-American-Israeli sponsorship. ISIL did manage to get a hold of both private Saudi funding and significant quantities of foreign armaments, including US arms, during the maelstrom of the wars in Syria and Iraq. While largely independent, in 2015, Jabhat al-Nusra, Al Qaeda’s local affiliate, also benefitted from its participation in an umbrella coalition of Saudi-, Turkish-, and Qatari-sponsored groups known as Jaish al-Fatah, or the Army of Conquest. The extremist jihadists had a free hand to set their own agendas in everything from taking territory to running propaganda campaigns aimed at recruitment.

In other words, unlike what the “fakestream” media in the West would like to suggest, it was outsiders and not the Syrian government that wrote checks, shipped arms, dropped bombs and fired missiles into Syria, while the Syrians were killed, made homeless, driven into exile, and seen their country carved into pieces, in a regime change campaign that, despite being more or less defeated, continues to rage to this today. But why?

The regime changers still continue to provide vast financial aid and weapons to anti-government militants, and side with forces that promote regime change and permanent occupation in places like Raqqa. This is driven by several regional and domestic objectives - from destroying the Syria-Iran alliance to distracting the Saudi population from domestic problems to a desire to ensure that there will be no new branches of resistance in the Levant. This way Riyadh, Tel Aviv and Washington could help counter Iran’s strength and spread their influence throughout the region.

As the Syrian government is Iran’s closest Arab state ally, the Saudis view regime change in Syria as an opportunity to deal a major blow to Iran and its allies in Iraq and Lebanon.

To this end, Saudi clerics rely on the Middle East’s explosive sectarian divisions to motivate Saudi youth to travel to Syria and wage jihad against the Shiite/Alawite political order. The problem is, many Syrians are secularists who practice a moderate form of Islam, so the widespread rejection of Wahhabism in Syria has undermined Riyadh’s view. In the meantime, some 70 percent of officials in both the executive and legislative branches of power have always been from the Sunni community of Syria ever since Bashar Al-Assad's power, Hafez Al-Assad. The same is true about the country's governors as well as senior commanders and security chiefs.

Also, the Syrian government and its allies Iran, Russia and Hezbollah have proven resilient. The anti-partition alliance has scored decisive victories over many terror-held cities and towns in recent months. Little wonder Israel continues to engage in strikes on Syrian targets. Tel Aviv and Riyadh are brothers in arms in this warfare.

At any rate, although various terrorist groups have powerful patrons, the Syrian government is no longer facing a potentially existential threat. In the prevailing circumstances, Riyadh would be wise to recognize that it is no longer calling the shots like the early days of the conflict. In post-war Syria, there will never be a pro-Riyadh leadership in Damascus.

Tags: Damascus Syria Saudi
Short Link rasanews.ir/201okj
Share
0
Please type in your comments in English.
The comments that contain insults or libel to individuals, ethnicities, or contradictions with the laws of the country and religious teachings will not be disclosed