Rasa - The Israeli military says it has attacked Syrian government artillery positions in the Golan Heights in what, if confirmed, would be another act of aggression against Syrian territory. 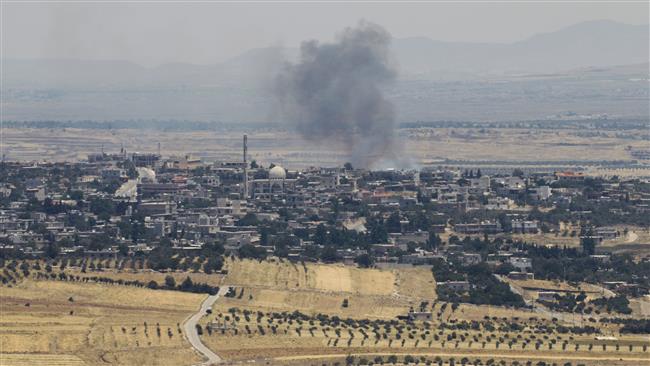 RNA - In a statement released on Saturday, the Israeli army said that it had “targeted three artillery cannons” of the Syrian government in the Golan Heights in what it claimed to have been a “response to the [firing of] projectiles that hit Israel.”

It also threatened to “intensify” its attacks on Syria in case any more projectiles were fired into Israel by pro-Damascus forces.

If confirmed, the Saturday attack would be the second Israeli strike on Syria this week. On Thursday, Israel struck a Syrian artillery position near southwestern town of Quneitra.

On several occasions, the Syrian army has confiscated Israeli-made arms and military equipment from terrorists fighting the government forces. Israel has also been providing medical treatment to the extremist militants wounded in Syria.

Back in June, The Wall Street Journal reported that Israel had been providing militants in Syria’s Golan Heights with a steady flow of funds and medical supplies.

Israel seized the Golan Heights from Syria during the 1967 Six-Day War and has continued to occupy two-thirds of the strategically-important territory ever since, in a move that has never been recognized by the international community.

The regime has built tens of illegal settlements in the area since its occupation and has used the region to carry out a number of military operations against the Syrian government.

Tags: Syria Israel
Short Link rasanews.ir/201ois
Share
0
Please type in your comments in English.
The comments that contain insults or libel to individuals, ethnicities, or contradictions with the laws of the country and religious teachings will not be disclosed