Bahrainis Protest against Manama’s Attempts to Normalize Ties with Israel

Rasa - Security forces fired tear gas to disperse dozens of Bahraini demonstrators who had taken to the streets across the country to protest Manama’s potential Normalization of ties with Israel. 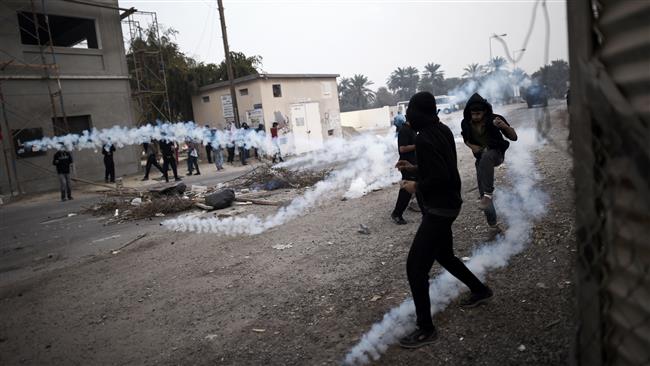 RNA - The skirmishes broke out after tens of protesters marched through the streets in Shakhurah neighborhood on the outskirts of the capital, Manama, and the towns of Abou-Sabih, Nuwaidrat, and Ma’ameer against what they condemned as the ruling al-Khalifah regime’s growing inclination toward Tel Aviv, presstv reported.

According to a report by the opposition al-Wafa Islamic Movement, the security forces engaged in fierce clashes with the protesters, who were shouting anti-government and anti-Israeli slogans. Some of the demonstrators also set fire to Israeli and British flags amid the clashes.

Meanwhile, Yousef Al-Khaja, a member of Bahrain’s National Democratic Action Society (Wa’ad), said in a Twitter post that Bahraini authorities had also banned an anti-Israel symposium scheduled to be held on Wednesday night at the headquarters of the movement in the capital.

The Wa’ad, in a statement, apologized to the invitees for not holding the forum ahead of the centennial “anniversary of the Balfour Declaration and the Zionist strategy in the region because of the prevention of the Bahraini Ministry of the Interior.”

Britain is denounced for its 1917 Balfour Declaration, which set the stage for the occupation of Palestinian territories and the creation of the Israeli regime.

The demonstrations come amid reports that Israel and Bahrain are cozying up. Reports say Bahrain’s King Hamad bin Isa Al Khalifa has invited a Jewish delegation to work on the rapprochement between his country and the Israeli regime.

On September 23, unnamed Western and Bahraini officials told the Middle East Eye news portal that an official announcement of the establishment of relations could happen as soon as next year.

Bahrain has no formal diplomatic relations with Israel. However, a number of Israeli tourists and businessmen have been known to visit the Persian Gulf island of 1.4 million people in recent years.

Last month, Israeli newspapers quoted a prominent rabbi who had met with Bahraini king as saying that the king had told him he opposed the Arab states’ boycott of Israel and intended to allow citizens from his kingdom to visit Israel.

Bahrain’s King Hamad bin Isa Al Khalifah has criticized the Arab boycott of Israel, saying that the Bahrainis are free to visit Israel.

In late December last year, a video circulated on social media of a ceremony to mark the Jewish Hanukkah holiday hosted by Bahrain. It showed Bahraini dignitaries and traders in local kaffiyeh attire attending the party and dancing with Orthodox Jews.

More than 400 Bahraini judicial activists blasted Bahraini officials for hosting the event. The video also prompted condemnation from the Palestinian movement Hamas, which urged Bahrain to end the move toward normalizing ties with Israel.

The still shows participants at an Israeli celebration in Bahrain on December 24, 2016.

Most Arab governments have no official diplomatic relations with Israel. Even so, reports have indicated that several of them, including Saudi Arabia, have had secret relations with Tel Aviv.

Back in June this year, the Times reported that Saudi Arabia and the Israeli regime were in clandestine talks to establish official economic relations for the first time since the regime was created on Palestinian territories some 69 years ago.

According to a report by The Wall Street Journal published in early January last year, Israel’s efforts to normalize ties with the Arab states have intensified following the conclusion of a landmark nuclear deal between Iran and six other countries in 2015.

Tags: Khalifa bahrain
Short Link rasanews.ir/201ohy
Share
0
Please type in your comments in English.
The comments that contain insults or libel to individuals, ethnicities, or contradictions with the laws of the country and religious teachings will not be disclosed