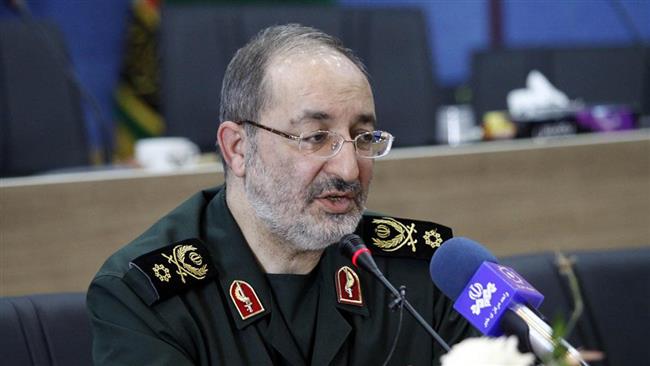 RNA - “On behalf of the Armed Forces and the entire prudent people of the Islamic Iran, we tell the corrupt and rogue US government that the trend toward the boosting of Iran’s defensive power in order to counter America’s corrupt regime will continue unabated and with more motivation and determination,” said Brigadier General Massoud Jazayeri, who is the chief spokesman for Iran’s Armed Forces, on Friday.

The remarks came hours after Trump delivered a speech in which he said he was authorizing the US Treasury Department to impose further sanctions on “the entire” IRGC for what he claimed was “its support for terrorism.” Trump stopped short of designating the IRGC as “a foreign terrorist organization,” however, as some reports had indicated he would do.

‘All in good time’

The IRGC is a branch of the Iranian Armed Forces, a standing army of a United Nations member state. It has been effectively providing advisory military support for the elected governments of Iraq and Syria in their battles against various groups of extremist militants. Some of those militant groups receive logistical, financial, and other forms of support from the US government, particularly in Syria, where Washington has attempted but failed to have the Syrian government toppled.

Brigadier General Jazayeri said there was more to come for Trump.

“The IRGC is today more powerfully disrupting US leaders’ filthy schemes one after another, and on the rest of this path, many things remain unsaid, [but] the Trump administration will see their outward manifestations all in good time,” he said.

Iranian President Hassan Rouhani spoke to the nation shortly after Trump’s speech, dismissing the remarks of the American businessman-turned-politician as a “pile of delusional allegations” and defending the IRGC.

In his Friday speech, Trump also ranted against an international nuclear deal with Iran, saying he would not certify Iranian compliance with it to the Congress and would “terminate” it if he could not “reach a solution working with Congress and our allies” to change the deal.

Iran has made it clear that the deal is not renegotiable, and Trump soon faced a storm of international reactions — including from some of the US’s main allies — over his hostile remarks on Iran and the deal.

The leaders of the UK, France and Germany, which are parties to the Iran deal, issued a statement vowing continued commitment to it.

Under the deal, which has been endorsed by the UN Security Council Resolution 2231, Iran undertook to apply certain limits to its nuclear program in exchange for the termination of all nuclear-related sanctions against Tehran.

Tags: IRGC Iran Trump
Short Link rasanews.ir/201ofn
Share
0
Please type in your comments in English.
The comments that contain insults or libel to individuals, ethnicities, or contradictions with the laws of the country and religious teachings will not be disclosed