Rasa A UK-based rights group has accused Myanmar’s government of intentionally starving Rohingya Muslims in a bid to force the persecuted minority group out of the country. 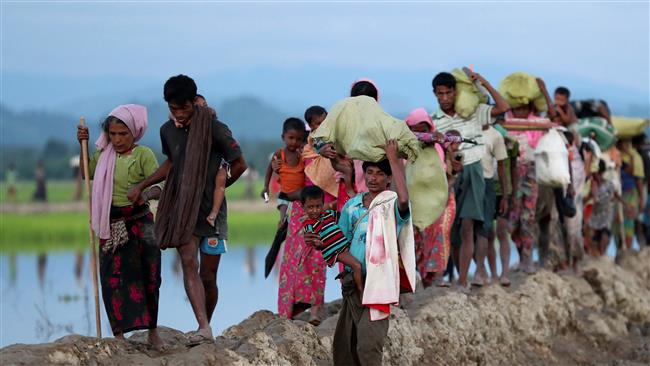 RNA - “Rohingya are now being starved out of Burma (Myanmar) and unless real pressure is put on the government and military to lift aid and movement restrictions, most… will be forced out within weeks,” Tun Khin, the president of the Burmese Rohingya Association UK said on Friday.

The rights organization said the remaining Rohingya would be forced out of Myanmar within weeks if urgent action was not taken.

Separately, the Myanmar Human Rights Network, also based in the UK, called for immediate pressure on the Myanmarese government and military to lift the restrictions on aid access to Rakhine State, where the Rohingya Muslims have been subjected to government-sanctioned violence since late last year.

On Wednesday, the United Nations (UN) released a damning report detailing attempts by government soldiers and Buddhist mobs to drive the Rohingya out by torching entire villages.

Hundreds of thousands of Rohingya Muslims have already fled the violence to neighboring Bangladesh.

According to UNICEF, nearly 150,000 Rohingya women and children refugees need urgent support to prevent malnutrition or to recover from it. UNICEF and other agencies estimate that 60 percent of the refugees are children, thousands of them being unaccompanied.

Myanmar’s leadership has taken almost no heed to the international calls to stop the violence.

Tags: Rohingya Myanmar
Short Link rasanews.ir/201ofQ
Share
0
Please type in your comments in English.
The comments that contain insults or libel to individuals, ethnicities, or contradictions with the laws of the country and religious teachings will not be disclosed