Rasa - A week after the independence referendum, Iraq’s Kurdish region leaders founded “Political Leadership of Kurdistan-Iraq”, a leadership body replacing the High Referendum Council that undertook the preparation and organization of the controversial September 25 vote on breakaway from Iraq. 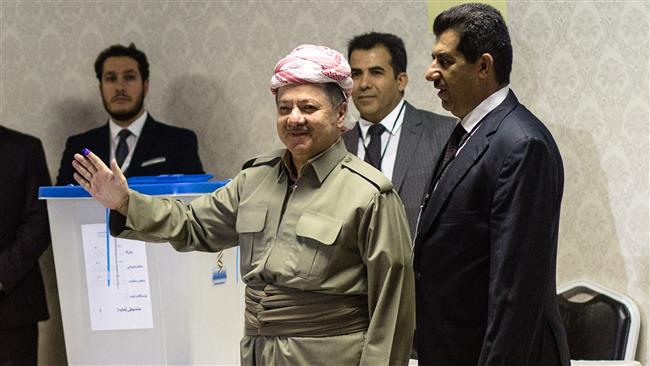 RNA- A week after the independence referendum, Iraq’s Kurdish region leaders founded “Political Leadership of Kurdistan-Iraq”, a leadership body replacing the High Referendum Council that undertook the preparation and organization of the controversial September 25 vote on breakaway from Iraq.

Announced on October 1, the body, according to the reports coming out of the autonomous Kurdish region, is comprised of leaders of the Kurdistan's regional political parties. The president of the Kurdistan Regional Government (KRG) Masoud Barzani, whose twice extended term in office expired in August, was named head of the new council.

Short after foundation of the PLK, various voices rose in opposition to the aims and motivations behind the Barzani move. Challenges to the body were opened by the Kurdish opposition party Gorran (Change) whose leaders in a statement asserted their strong objection to the arrangement, calling the measure a step towards dictatorship and debasement of the region’s democratic institutions.

Other parties also came on board to make a front against the council foundation. The Kurdistan Islamic Group (KIG) and a large portion of the Patriotic Union of Kurdistan (PUK) seriously came against the step taken by the KRG president.

Now there are some questions: What is the real end behind the post-referendum council? Can it succeed?

Three major goals are seen as motivating the move:

In 2013, Barzani’s presidency over the Kurdish regional government expired after two 5-year terms. At that time, the political parties of Kurdistan decided that the time was not proper to hold presidential election, allowing the region’s local parliament to extend his presidency for two years. The extended term also ended on August 20, 2015, triggering return of the presidential debate to the surface of the autonomous region's politics after two years of equilibrium.

The Kurdistan Democratic Party (KDP), dominated by Barzani family and led by him, opposed holding presidential election in 2015 in the Kurdish region, citing the crisis mainly caused by the ISIS terrorist group and the need to confront it. Therefore, Barzani was illegally granted additional two years in office. His tenure was consolidated by a nominal extension ruling by the Kurdish Supreme Court.

The second extension is also expired now, with Barzani family and the KDP left empty-handed in terms of legal excuses for any debate to re-impose Masoud Barzani as the first man of the region. There is a notion that replacement of the Political Leadership of Kurdistan-Iraq with the High Referendum Council under the excuse of management of the post-vote Iraqi Kurdistan region developments is an effort meant to help Barzani maintain the power as a top man, though under a new title.

Another drive for the fresh council establishment is a goal to push to the sidelines the rivals and also the critics of the breakaway vote. According to the PLK mechanism, the leaders of the pro-referendum parties will be independently in charge of the regional management as well as future negotiations. This means that the rival parties like Gorran and PUK will be cut from the council’s power core in the future, and also it will operate independent of the prospective government and parliament. In fact, the leadership body is expected to rule the Kurdish region to uncertain time. This arrangement will allow Barzani remain power-holder and strong man of the region. Therefore, exclusion of the opponents is one of the key ends of the new body, revealing the mindset of Barzani orbit: Whoever is not with us will be excluded from the power and management.

The PLK is expected to circumvent the Kurdish region’s democratic mechanisms. In other words, if things go as they do now, in the future the government and parliament will not be able to supervise the Barzani-headed leadership body. In this case, the democratic system will be weakened and the region will be reduced to an advisory sultanate administered by a leader with an array of advisors who could be political parties' heads. The parliament, a body whose supervision could curb illegal actions of the PLK, appears to be the main victim of the democratic apparatuses impairment campaign.

With these aims in mind, can the council be successful and live on? Apparently, Barzani does not have easy work of proceeding with his plans due to the domestic opposition he should deal with. The antipathetic stance of Hero Ibrahim Ahmed, the widow of the late Iraqi president Jalal Talibani, especially caught attention. She in a statement last Monday rejected to support the leadership body, describing it a “big mistake” and comparing it to the Kurdish leadership council between 1987 and 1992, the years during which Kurdistan had neither government nor parliament. Her argument is that the new body will destroy all of the democratic achievements the region obtained during the past 26 years, and so it is a step back and that under the current circumstances its powers should not be approved.

The opposition appears to have left its impacts as some figures inside the PLK began seeking solution for the political stalemate. According to the speculations, the leadership council will be either dissolved or go under supervision of a stronger local parliament perhaps with rebranding. Parliamentary supervision will mean all actions of the PLK will be watched by the legislature and unapproved steps will be deemed illegal. This arrangement will certainly deal a blow to Barzani’s struggle for solidification of his power in a new position.

Tags: Barzani Kurd Iraq
Short Link rasanews.ir/201ody
Share
0
Please type in your comments in English.
The comments that contain insults or libel to individuals, ethnicities, or contradictions with the laws of the country and religious teachings will not be disclosed