Rasa - Iraqi pro-government fighters from the Popular Mobilization Units have found nearly a dozen mass graves containing bodies of security forces and civilians, who are believed to have been executed by Daesh Takfiri terrorists, on the outskirts of the recently-liberated town of Hawijah in Kirkuk province. 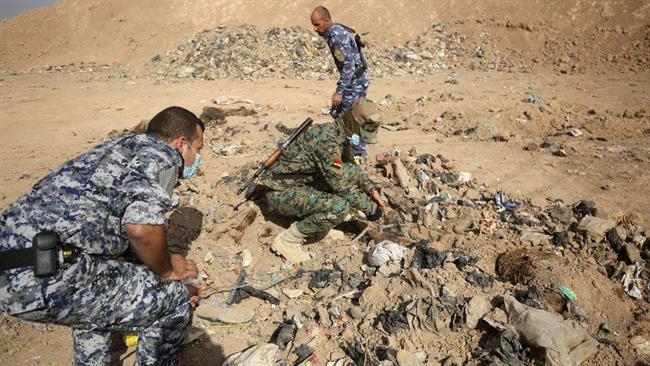 RNA - The media bureau of the volunteer forces, commonly known by the Arabic name Hashd al-Sha’abi, announced in a statement on Saturday that the grisly discovery was made during a sweep in the southwest of Hawijah, located 45 kilometers west of Kirkuk, Arabic-language al-Sumaria television network reported.

The statement added that there were women and children among the victims, noting that Hashd al-Sha’abi fighters were coordinating with competent teams in order to identify the victims.

Meanwhile, Hashd al-Sha’abi forces have discovered a detention facility in Hawijah, used by Daesh terrorists to incarcerate people and subject the detainees to various forms of torture.

The commander of Hawijah liberation operation, Lieutenant General Abdul Amir Yarallah, also said on Saturday that soldiers from the Federal Police Force, the Interior Ministry's elite rapid response forces and pro-government fighters had managed to wrest control over 150 villages and hamlets in Hawijah district. They killed 385 Daesh Takfiris, including five snipers, and arrested six others during the operation.

Yarallah went on to say that the forces also recovered a considerable amount of munitions, and destroyed 25 militant fortifications, 10 arms depots, 15 booby-trapped houses and ten tunnels.

The high-ranking Iraqi military official noted that 240 displaced people were evacuated from the conflict zones, and five militant communications centers were also destroyed.

“I announce the liberation of the town of Hawijah,” Abadi said, adding, “Only the outskirts remain to be recaptured.”

Abadi described the latest gain as a “victory not just of Iraq but of the whole world.”

Tags: Hawijah DAESH Iraq
Short Link rasanews.ir/201odC
Share
0
Please type in your comments in English.
The comments that contain insults or libel to individuals, ethnicities, or contradictions with the laws of the country and religious teachings will not be disclosed