Rasa - Syrian President Bashar al-Assad said that his country will never forget Iran's support to the Syrian government and nation during the difficult times of war. 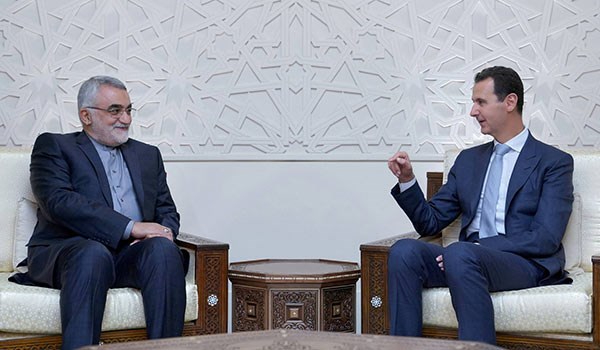 RNA - "Iran has always helped Syria during difficult times," President Assad said in a meeting with Head of the Iranian Parliament's National Security and Foreign Policy Commission Alaeddin Boroujerdi in Damascus on Thursday.

The Syrian president also stressed the need for close cooperation among members of the 'resistance axis'.

Boroujerdi, for his part, congratulated President Assad on the recent victories scored by the Syrian army against terrorists.

"The immensity of the recent developments in Syria will certainly be further understood in the future, because the Syrian government and nation have succeeded in defeating moves by the United States, Israel and their regional allies through resistance and perseverance," he added.

In relevant remarks on Wednesday, Boroujerdi in a meeting with Syrian Foreign Minister Walid al-Moallem underlined his country's continued support for Syria in the fight against terrorist groups.

"The Islamic Republic of Iran will continue support for Syria in the battle against terrorism and its advocates until materialization of imminent victory and return of peace and stability to the country is celebrated," Boroujerdi said in the meeting in Damascus.

Moallem, for his part, appreciated Iran's all-out support for Syria, stressing that his country will continue war against terrorism until purging all terrorists.

During the meeting, both officials underscored their countries' common positions on safeguarding Iraq's sovereignty and unity, warning of the negative impacts of the independence referendum in the Iraqi Kurdistan region on regional stability and war against terrorism.

Tags: Iran Syria
Short Link rasanews.ir/201ocX
Share
0
Please type in your comments in English.
The comments that contain insults or libel to individuals, ethnicities, or contradictions with the laws of the country and religious teachings will not be disclosed