Rasa - A senior Iranian lawmaker has denounced the recent Kurdish secession referendum in northern Iraq as a “strategic mistake,” warning that the plebiscite will pose a myriad of challenges to the Kurdish region. 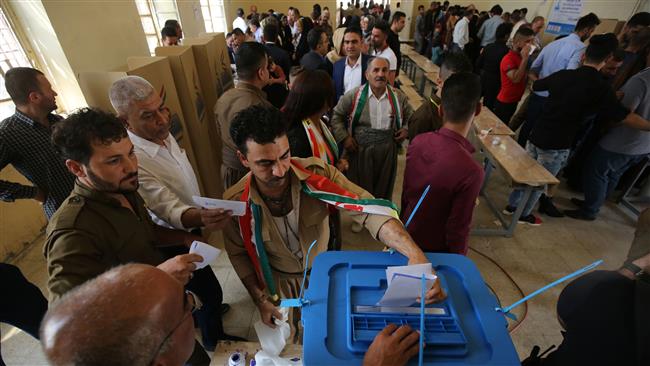 RNA - “The holding of the referendum in northern Iraq was a strategic mistake made in spite of the advice offered,” Chairman of the Iranian Parliament’s Committee on National Security and Foreign Policy Alaeddin Boroujerdi said in a Tuesday interview with IRNA in Damascus.

The lawmaker, who is visiting Syria at the top of a parliamentary delegation, called on Iraq’s semi-autonomous Kurdistan Regional Government (KRG) to immediately revoke the results of the referendum to help restore security and stability to the Kurdish region.

“If the authorities of Iraq’s Kurdistan insist on this path, they will face a lot of political, economic and military problems,” he added.

On September 25, the Kurdistan Regional Government held the non-binding referendum on secession from Iraq in defiance of stiff opposition from the central government in Baghdad and much of the international community. Kurdish officials said over 90 percent of voters said ‘Yes’ to separation from Iraq.

Political observers have warned that KRG’s referendum scenario is in line with Israel’s policy of dividing the regional Muslim states.

After the Monday referendum, the Iraqi government ordered the KRG to hand over its international airports in Erbil, and the city of Sulaymaniyah, as well as its border crossings.

It also asked the KRG to either cancel the result of the plebiscite or face potential sanctions, international isolation, and military intervention.

A ban on international flights into and out of the Iraqi Kurdish region also took effect on Friday.

The KRG has so far refused to either hand over the airports and land terminals or annul the outcome of the vote.

Elsewhere in his comments, Boroujerdi lauded the continued achievements of Syria’s anti-terrorism campaign, saying, “Despite direct and indirect US support for terrorists…the balance of power changed in the interest of the resistance front.”

“The victories of the Syrian army, popular and resistance forces as well as the assistance provided by the Islamic Republic of Iran plus the valuable role of Lebanon’s Hezbollah helped Syria pass the risky stage,” he added.

Washington and its allies have repeatedly been accused of targeting and killing civilians and drawn criticism over their failure to destroy Daesh, which they claim to be fighting.

The Syrian government and its allies have on multiple occasions criticized what they view as friendly ties among US special forces, militant groups and Daesh terrorists in the region with the goal of slowing the advance of the Syrian army.

Tags: Iran Kurd
Short Link rasanews.ir/201obz
Share
0
Please type in your comments in English.
The comments that contain insults or libel to individuals, ethnicities, or contradictions with the laws of the country and religious teachings will not be disclosed