Rasa - The UN refugee agency has warned that Rohingya Muslims fleeing to Bangladesh from "unimaginable horrors" in Myanmar will face huge hardships and worsening conditions unless aid efforts are intensified. 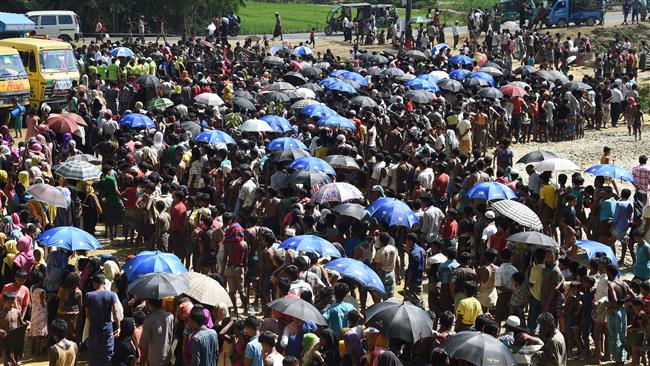 RNA - The United Nations High Commissioner for Refugees Filippo Grandi said during a Monday news briefing in the Bangladeshi capital of Dhaka that "solutions to this crisis lie with Myanmar," insisting, however, that until then, the world had to help the "deeply traumatized" Rohingya refugees.

Grandi, who had met and talked with the distraught refugees on a weekend visit to camps in southeast Bangladesh, said that they had seen “villages burned down, families shot or hacked to death, women and girls brutalized."

He went on to call for aid to be "rapidly stepped up" and thanked the Bangladesh government for keeping its border open to the refugees.

Grandi also said on Sunday that Bangladesh needed “massive international assistance” to feed and shelter over 430,000 Rohingya Muslims who had fled Myanmar to the neighboring country over the past four weeks.

"I was struck by the incredible magnitude of their needs. They need everything, they need food, they need clean water, they need shelter, they need proper health care," Grandi said after visiting the camps.

The UN official further noted that there had been an "incredible outpouring of local generosity" but stressed that it needed to be "beefed up by massive international assistance, financial and material."

The brutal, state-backed violence in Myanmar's Rakhine state and the massive refugee exodus are the biggest challenge facing the government of Nobel laureate Aung San Suu Kyi since it rose to power last year in a transition from nearly 50 years of military dictatorship.

The United Nations has described the extensive military response against the nation’s minority Muslim population as ethnic cleansing, with refugees and rights groups accusing Myanmar forces and Buddhist vigilantes of violence and arson aimed at flushing out the Rohingya.

This is while the Buddhist-majority Myanmar regards the Rohingya Muslims as illegal immigrants from Bangladesh.

Over the past month, thousands of Rohingya Muslims have fled from the army-led crackdown across the border in Rakhine. The recent exodus of Rohingya has brought the number of refugees from Rakhine living in Bangladesh to over 800,000.

Meanwhile, in a public display of discord within the Association of Southeast Asian Nations (ASEAN), to which Myanmar is a member, Muslim-majority Malaysia disassociated itself from a statement issued by the group’s chair, the Philippines, arguing it misrepresented the situation and did not identify the Rohingya as one of the affected communities.

Myanmar objects to the term Rohingya, saying Muslims of Rakhine state are not a distinct ethnic group.

Malaysia summoned Myanmar's ambassador earlier this month to express grave concern over the violence and the persisting atrocities against the Rohingya.

Tags: Rohingya Myanmar
Short Link rasanews.ir/201oYr
Share
0
Please type in your comments in English.
The comments that contain insults or libel to individuals, ethnicities, or contradictions with the laws of the country and religious teachings will not be disclosed