Rasa – Lieutenant Commander of the Islamic Revolution Guards Corps (IRGC) Brigadier General Hossein Salami denounced US President Donald Trump’s latest remarks against Iran as “slander”, noting that his furious speech at the UN had its roots in Iran’s growing power in the region. 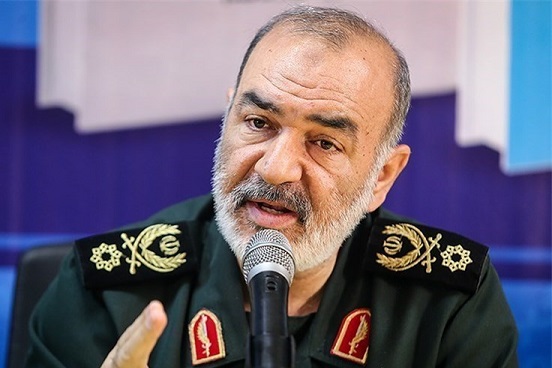 RNA - Trump’s speech at the UN showed how powerful and influential Iran is getting at the international level, General Salami said on Thursday, responding to recent allegations leveled against Iran by Trump during his speech at the United Nations General Assembly.

Since the Islamic Revolution in Iran in 1979, the US has not been able to advance its agenda and fulfill its interests in the region, the IRGC general said, stressing that Washington no longer has any influence or control over the regional developments, an issue which has made American authorities furious.

Following its successive defeats in the region, the US is now in a desperate situation, Salami noted, adding that Trump’s latest hostile comments against the Iranian nation at the UN also proved this.

He further said that the US is fully aware that the Islamic Republic is now turned into a regional power and that its peaceful nuclear program cannot be stopped.

The reaction came after Trump claimed during his first address to the 72nd session of the UN General Assembly on Tuesday that Iran's "support for terror is in stark contrast to the recent commitments of many of its neighbors to fight terrorism and halt its financing".

The remarks came as the US and some of its regional allies, including Saudi Arabia, have been staunch supporters of Takfiri terrorists in the Muslim states of Syria and Iraq.

Tehran has, meanwhile, been praised for its support for anti-terrorism efforts by the governments in Damascus and Baghdad.

The Takfiri terrorists of Daesh were initially trained by the CIA in Jordan in 2012 to destabilize the Syrian government.

Tags: Hossein Salami Muslim Syria Trump
Short Link rasanews.ir/201oXX
Share
0
Please type in your comments in English.
The comments that contain insults or libel to individuals, ethnicities, or contradictions with the laws of the country and religious teachings will not be disclosed