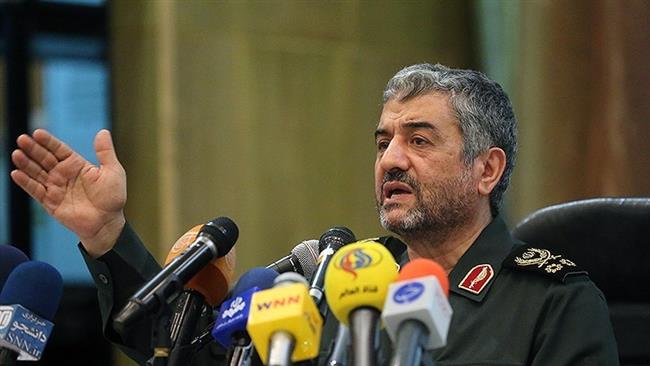 RNA - "With the successive crushing defeats the Americans have suffered in the region especially in the face of Iran, it is natural that their nervous system and coherence of thought have been upset," Major General Mohammad Ali Ja’afari said on Wednesday.

The senior Iranian commander’s remarks came in reaction to Trump’s UN speech on Tuesday, during which he accused Iran of engaging in “destabilizing activities” in the region.

Trump claimed that Iran's "support for terror is in stark contrast to the recent commitments of many of its neighbors to fight terrorism and halt its financing.”

Ja’afari condemned Trump’s anti-Iran rhetoric as baseless and outrageous, adding that there was nothing new in the US president’s speech, except the fact "the US showed its true colors to the world."

"Today the world sees the American image that Iran has been trying to unmask for years,” the IRGC commander said.

He called on the Iranian government to use all its options to safeguard the interests of the nation.

Meanwhile, Deputy Chief of Staff of Iran's Armed Forces Brigadier General Massoud Jazayeri said Trump’s UN speech revealed the “weakness and desperation of an administration suffering from melancholia in its dream of being a superpower."

Jazayeri also called Washington's threat to scrap Iran's nuclear agreement with the P5+1 group of countries “a bluff,” stressing that pressures would fail to intimidate Iran into making compromises with the US.

‘All parties to JCPOA must abide by it’

Meanwhile, Secretary of Iran’s Supreme National Security Council Ali Shamkhani (seen below) reacted to Trump’s remarks about the nuclear agreement between Tehran and the P5+1 group of countries – known as the Joint Comprehensive Plan of Action (JCPOA).

During his UN speech, Trump denounced the nuclear agreement with Iran as “an embarrassment” that the US may abandon.

He said the Iran deal was “one of the worst and most one-sided transactions the United States has ever entered into.”

“No signatory to the JCPOA can balk at the accepted mechanisms of this international agreement under false or illegal pretexts,” he said.

Since the implementation of the JCPOA, the International Atomic Energy Agency has verified Iran’s commitment to the deal, Shamkhani said, warning that any media hype or propaganda campaign against the agreement was devoid of any value or credibility.

The Iranian official went on to say that the anti-Iran remarks by Trump and Israeli Prime Minister Benjamin Netanyahu showed the warmongering and hostile attitudes of Washington and Tel Aviv.

Addressing the UN General Assembly on Tuesday, Netanyahu praised Trump’s stance on the Iranian nuclear deal and called for crippling sanctions against Tehran to make it forgo its nuclear capability.

Iran and the five permanent members of the UN Security Council – the United States, France, Britain, Russia and China – plus Germany signed the JCPOA on July 14, 2015 and started implementing it on January 16, 2016.

Israel and the administration of Trump have on numerous occasions criticized the deal, calling it a mistake.

Backed by UN Security Council Resolution 2231, the JCPOA is an international agreement, which makes it impossible for any party to the deal to withdraw from it.

Tags: US IRGC Iran JCPOA
Short Link rasanews.ir/201oWw
Share
0
Please type in your comments in English.
The comments that contain insults or libel to individuals, ethnicities, or contradictions with the laws of the country and religious teachings will not be disclosed