Rasa - Iran blasted the “unfounded allegations” by Israeli Prime Minister Benjamin Netanyahu at the United Nations General Assembly, and said it was an effort to distract the public opinion from Tel Aviv regime's horrific policies and practices. 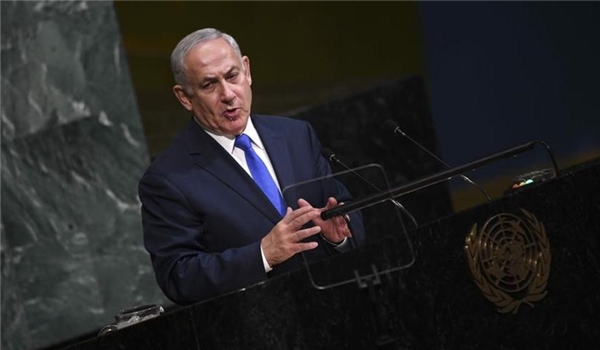 RNA - “Every mad man thinks all other men are mad,” Iran’s representative to the UN Hossein Maleki said in a statement on Tuesday evening while reacting to Netanyahu’s anti-Iran statements at the 72th session of the UN General Assembly.

Maleki that Netanyahu tried to abuse the UN General Assembly by blaming others.

The full text of Maleki’s statement is as follows:

In the Name of God, the Most Compassionate, the Most Merciful,

As usual, today the representative of the Israeli regime made unfounded allegations against Iran. He tried to deceive the whole world by distracting public opinion from the horrific policies and practices of his own regime. However, the nature of this regime, that is founded on aggression, occupation, suppression, violence and terror can, in no way, be covered up by accusing others.

This is another type of WMD in the hands of this regime: Weapons of Mass Deception. Nevertheless, he ignored the fact that in the information age this weapon is becoming more useless day by day.

Instead of lying, accusing others and attempting to deceive public opinion, he must have explained to this Assembly why his regime has invaded, without exception, all of its neighbors and even countries beyond the region, and waged over 15 wars during its very short lifetime?

Why does this main State-sponsor of terrorism continue to commit terrorist acts and to do so supports ISIS, including through providing them with arms and other military assistance?

He claimed that this regime has saved many lives in different parts of the world, but he failed to explain why does his regime takes the lives of the Palestinians on daily basis? Why does it, as the last apartheid regime of the world and warden of the biggest prison of the world, continue to arrest and jail thousands of Palestinians and impose the most inhumane blockade against millions of them in the Gaza Strip? Does he think that by wearing a white glove he can cover up his red hands?! Does he think that the world has forgotten the Sabra and Shatila massacre by the Zionist regime of Israel, in which they killed almost 1000 Palestinian and Lebanese civilians in less than 2 days?

He must have explained why his regime, in addition to having a large arsenal of sophisticated conventional weapons, continue possessing all types of weapons of mass destruction - chemical, biological and nuclear. Why does it continue to refuse to become a party to treaties banning weapons of mass destruction, in particular the NPT, as a result of which all its nuclear activities and installations remain unsafeguarded? and why does it reject the establishment of a Nuclear-Weapon-Free Zone in the Middle East, despite repeated calls by the international community of States and consensus resolutions of this Assembly over the past 40 years?

One of the questions that he was expected to answer today is why does this regime – which is the only nuclear weapon possessor in the Middle East that also hides itself behind the hypocritical doctrine of “strategic ambiguity” - so shamelessly continue to lecture the world about non-proliferation and the dangers of Iran's nuclear program, whose peaceful nature has continued to be certified regularly, by the IAEA, even after strict implementation of the JCPOA?

These are all questions that he was expected to answer. Instead, he hypocritically tried to abuse this Assembly by only accusing others; as every mad man thinks all other men mad. He also tried to stir anxiety about the JCPOA, as intrinsically and by its very nature, this regime is against resorting to diplomacy and favors only conflicts and wars, which is the main sustenance of its life!

Tags: Iran Israel
Short Link rasanews.ir/201oWf
Share
0
Please type in your comments in English.
The comments that contain insults or libel to individuals, ethnicities, or contradictions with the laws of the country and religious teachings will not be disclosed