Israel can’t push US to withdraw from Iran nuclear deal

Rasa - Israel’s Prime Minister Benjamin Netanyahu lacks the leverage to persuade US President Donald Trump to withdraw from the Iran nuclear agreement during their meeting at the United Nations, says an analyst in New York. 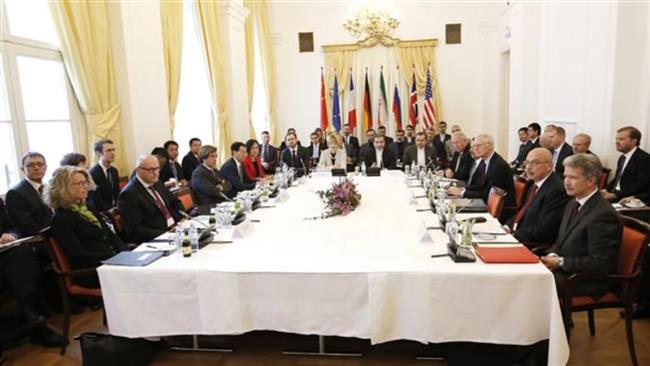 RNA - The Israel lobby is losing its influence in the US and there is an international consensus to preserve the current nuclear deal, said Ian Williams, a senior analyst with Foreign Policy in Focus.

“Many of Trump’s own security advisers are unhappy with the idea that the deal would be altered,” Williams said in an interview with on Tuesday.

Netanyahu is not considered a world leader and only has influence over the Zionist lobby and neoconservatives in the US, Williams added.

“Netanyahu is not a world statesman; he does not move the world; he moves a particular lobby in the US which evidence shows doesn’t have that much influence anymore,” he noted.

“Most Americans don’t like Netanyahu and don’t like what he stands for; he doesn’t actually represent anyone apart from himself and a bunch of neocons.”

Trump and Netanyahu met in New York on Monday on the sidelines of the UN General Assembly. They discussed how to “fix” the Iran nuclear agreement, Netanyahu told reporters after his hour-long meeting with Trump.

However, Trump and Netanyahu’s antipathy to the multilateral deal agreed in Vienna two years ago sets them apart from the overwhelming majority of other world leaders attending the annual UN summit.

US allies in Europe – most notably Britain, France and Germany, co-signatories of the deal – remain committed to the agreement and have signaled they are willing to disagree sharply and publicly with Trump on the issue.

US Ambassador to the UN Nikki Haley, who has made herself the principal channel for Trump’s critique of the deal, has been a lonely voice against it on the UN Security Council.

The stance taken by Trump and Netanyahu has also set them apart from their most senior national security advisers.

Trump told the 72nd session of the UN General Assembly that the nuclear agreement with Iran is an “embarrassment” to the United States, raising question whether he intends to stay in the 2015 accord.

The Republican president described the Iran nuclear agreement, known as the Joint Comprehensive Plan of Action, as “the worst and most one-sided transaction the US has ever entered into,” a characterization he often used during his presidential campaign.

Trump has previously suggested he may withdraw certification of the Iran agreement in a report the US State Department is due to submit to Congress by October 15.

Although that would not lead directly to the end of the agreement, it would open the door to new US sanctions which would represent a violation of the deal.

Tags: US Iran Israel Nuclear Deal
Short Link rasanews.ir/201oWX
Share
0
Please type in your comments in English.
The comments that contain insults or libel to individuals, ethnicities, or contradictions with the laws of the country and religious teachings will not be disclosed