Rasa - Iraqi Prime Minister Haider al-Abadi says Kurdish authorities are “playing with fire” by planning to hold a referendum on the independence of the semi-autonomous Kurdistan region. 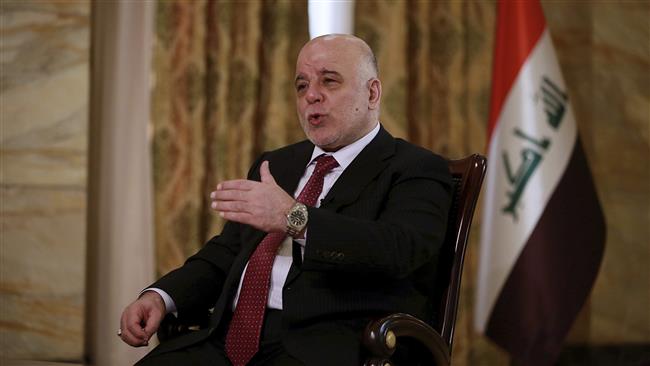 RNA - “A sincere and brotherly call to the leaders in Kurdistan: the decision of referendum is a dangerous one. I consider it playing with fire. This decision poses the biggest danger to our citizens in Kurdistan,” Abadi told The Associated Press in an interview on Saturday.

The plebiscite is scheduled for September 25 to gauge support for the possible secession of Iraq’s Kurdistan region.

On Friday, Iraqi Kurdish lawmakers approved holding the secession vote in the face of fierce opposition from the central government in Baghdad, the United Nations and the US.

Regional powers like Iran and Turkey have also expressed concerns about the planned referendum by the Kurdish Regional Government (KRG), arguing that it could create further instability in the region.

Abadi described the upcoming Kurdish vote as “unconstitutional” and “illegal,” noting that Baghdad was resorting to all legal processes it has at its disposal in response to the referendum.

The Kurdish vote, he said, jeopardizes gains achieved by the Iraqi Kurds under a self-rule government and opens "the gate for regional intervention in the KRG. Not in the rest of Iraq, but in the KRG."

Asked whether he would ever accept an independent Kurdistan, Abadi said it was a “constitutional matter.”

“It's not up to me, there is a constitution. … I don't have legal authority to accept this referendum. … If they (the Kurds) want to go down that road, they should work toward amending the constitution,” he pointed out.

Earlier this week, the Iraqi parliament voted to reject the Kurdish plebiscite, requiring Baghdad to “take all steps to protect the unity of Iraq and open a serious dialog” with Kurdish leaders.

Additionally, the White House called for the Iraqi Kurdish region to abandon the referendum “and enter into serious and sustained dialog with Baghdad.”

The UN also urged KRG head Masoud Barzani to drop plans for the secession vote and enter talks with Baghdad aimed at reaching a deal within three years.

The KRG has long been embroiled in disputes with the Iraqi federal government over budget payments, oil exports and control of ethnically-divided areas.

Barzani told a rally for secession in the city of Dohuk on Friday that the Iraqi Kurdistan did "not take legitimacy from anyone.”

The contentious vote comes at a time when Iraq is still grappling with the insecurity caused by the Daesh terrorist group.

Tags: Kurd Iraq
Short Link rasanews.ir/201oVV
Share
0
Please type in your comments in English.
The comments that contain insults or libel to individuals, ethnicities, or contradictions with the laws of the country and religious teachings will not be disclosed