Rasa - A convoy of hundreds of Daesh Takfiri terrorists evacuated from the Syria-Lebanon border has reached the Syrian province of Dayr al-Zawr as reports say the Hezbollah resistance movement manages to secure the release of one of its fighters from the captivity of Daesh. 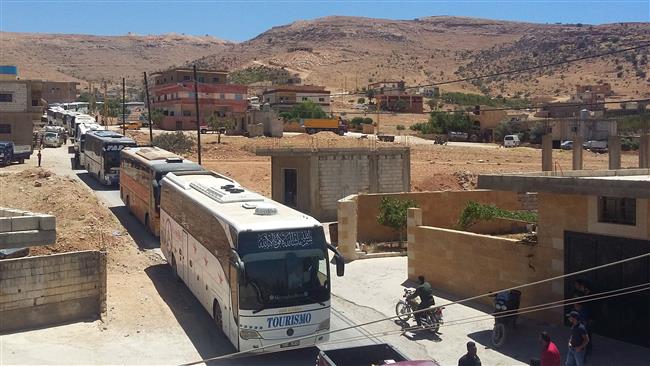 RNA - Pro-opposition sources in Syria confirmed on Thursday that a convoy of buses and vehicles carrying about 400 Daesh militants had crossed into Dayr al-Zawr a day earlier, after being stranded in the Syrian desert for about two weeks.

The militants’ transfer was part of a deal negotiated between Hezbollah, the Lebanese army and the Syrian government on the one side and the Daesh Takfiri group on the other.

The agreement was reached late last month when the militants were encircled by Syrian, Lebanese and Hezbollah forces in an area straddling the Lebanese-Syrian border. The militants finally surrendered and accepted to be transferred to the Syria-Iraqi border region, where Daesh still holds small towns and villages, in exchange for the terrorist group to hand over prisoners and remains of Lebanese soldiers captured in 2014.

Reports said one Hezbollah fighter surviving the cruel captivity of Daesh returned to Lebanon on Thursday.

Last month, Hezbollah fighters also identified the bodies of nine missing Lebanese soldiers held by Daesh after the militant group provided the locations of the graves.

The transfer of the convoy of militants to Bukamal, a Daesh-held town near the Iraqi border in Syria, had sparked criticism from the Iraqi government.

The US military, which leads a military coalition purportedly fighting Daesh in Iraq and Syria, had also warned that it would block the travel of the Daesh convoy across Syria. The coalition struck the road the convoy was traveling on two weeks ago but Hezbollah finally managed to secure a road for the transfer of militants to Dayr al-Zawr.

Hezbollah had assured Iraqi officials that the militants would pose no threat to Iraq’s security, the Daesh members who had been evacuated from Lebanon to Syria’s east were “defeated elements” and had no further thrust to fight.

Syrians managed to break a years-long siege on the province’s capital, which goes by the same name, last week and the battle continues to recapture almost half of the city which is still controlled by Daesh.

Tags: DAESH Syria Lebanon
Short Link rasanews.ir/201oUL
Share
0
Please type in your comments in English.
The comments that contain insults or libel to individuals, ethnicities, or contradictions with the laws of the country and religious teachings will not be disclosed