Rasa - The US Department of Justice will not bring civil rights charges against six Baltimore police officers involved in the arrest and death of Freddie Gray, the young African-American man whose killing sparked mass protests in 2015. 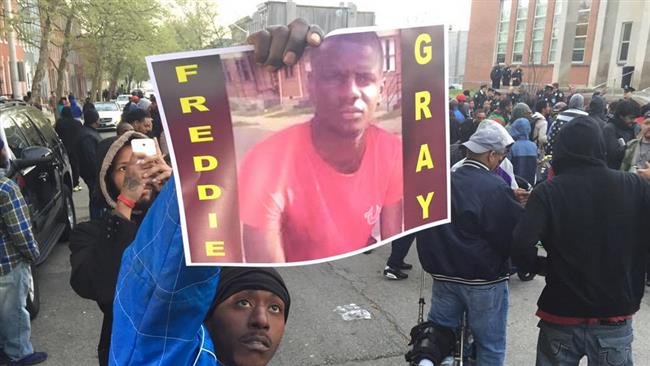 RNA - In a nine-page statement, the department said on Tuesday that "the evidence is insufficient to prove beyond a reasonable doubt" that the officers who arrested Gray "willfully violated" his civil rights.

"Accordingly, the investigation into this incident has been closed without prosecution," the statement concluded.

Gray died of severe spinal injuries on April 19, 2015, a week after he was arrested and detained by police. The 25-year-old was handcuffed and shackled in the back of a police van, but he was not restrained by a seat belt. During the transport, he suffered a broken neck and lost consciousness.

Prosecutors charged the six police officers, including a lieutenant and a sergeant, with multiple counts ranging from second-degree murder and involuntary manslaughter to reckless endangerment in connection with the incident.

The killing set off violent protests by angry residents who have long complained about police brutality in the predominantly black city.

The DOJ’s decision was not entirely unexpected as local authorities had previously acquitted three of the officers involved in Gray’s death while charges were dropped against the others.

Defense attorneys representing the officers expressed relief on Tuesday that their clients will not be held criminally responsible in the case.

"These cases were never criminal and should never have been charged as such," said Michael Belsky, one of the attorneys.

Five of the officers still face internal disciplinary hearings scheduled for the end of next month.

Gray’s death prompted the Justice Department to launch an investigation into allegations of police misconduct and discriminatory practices in Baltimore.

The department released its findings last year, detailing widespread patterns of abuse and misconduct within the troubled Baltimore Police Department.

The deaths of unarmed black men at the hands of police over the past years have sparked nationwide protests under the banner of Black Lives Matter movement.

Tags: Black US
Short Link rasanews.ir/201oTd
Share
0
Please type in your comments in English.
The comments that contain insults or libel to individuals, ethnicities, or contradictions with the laws of the country and religious teachings will not be disclosed