Why US Not Happy With Deir Ezzur’s Recapture from ISIS?

Rasa - The Syrian forces, backed by an array of allies, keep fast advancing in Deir ez-Zor fronts against ISIS terrorist group, raising hackles of the Americans who decided to deploy the Washington-backed militias to the strategic city in a bid to not fall behind the other actors in competition in eastern Syria. 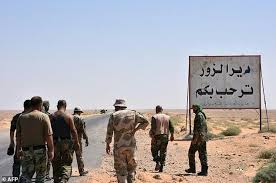 RNA - The Syrian forces, backed by an array of allies, keep fast advancing in Deir Ezzur fronts against ISIS terrorist group, raising hackles of the Americans who decided to deploy the Washington-backed militias to the strategic city in a bid to not fall behind the other actors in competition in eastern Syria.

The Deir Ezzur city is located in Syria's east and is considered a gate to the neighboring Iraq. Major part of the city, except for some small neighborhoods, fell to the terrorists in the initial stages of the Syrian conflict and remained as such to date. During the past five years, al-Nusra Front, an affiliate of al-Qaeda in Syria, and then ISIS went to great lengths to fully seize control what remained of Deir Ezzur but tough resistance to the various offensives by the encircled government forces frustrated the terrorist groups' efforts.

If the terrorists' push to control the remaining districts of Deir Ezzur was successful, the whole eastern Syria could have been considered a fallen part of the country, meaning it was almost impossible for the government forces to return and launch a recapturing campaign in the area, according to the analysts.

Fall of the eastern Syria to the terrorists was the US long-standing dream and Americans spared no efforts to realize it, and even occasionally operated as ISIS terrorist group's air power covering the terrorists' attacks by air raids to wrest the remaining parts from the army forces. During the past two years, the American fighter jets bombed the Syrian state forces at least twice in Deir Ezzur, for example, opening the way for immediate anti-army attacks by ISIS terrorists. However, the US failed to materialize goals on the ground as the stiff resistance by the protective forces, especially Lebanon's Hezbollah, continued to deal blows to the advancing militants. The US claimed that its warplanes meant to target the ISIS forces in the area and mistakenly hit the Syrian army units.

According to the Syrian media familiar with the Deir Ezzur developments, Hezbollah in June 2016 sent first batch of its elite units to the provincial capital of Deir Ezzur through a heliborne operation. The deployment came after the Lebanese group showed effective role in the then-ongoing Aleppo recapture operation and at the same time, ISIS considerably stepped up attacks on the government forces trapped in Deir Ezzur.

Apparently nobody believed the US account that the American jets mistakenly attacked positions of the Syrian army in Deir Ezzur as the Washington plans and strategy in east of  the war-ravaged country were clear to all. The Americans struggled to contribute to full seizure of eastern Syrian regions in a bid to create a wide gap with Iraq on its western border with Syria. This agenda served a bigger goal that wanted to prevent ground connection across the Axis of Resistance's territories starting from eastern Iran and ending in the western Syria and southern coasts of the Mediterranean Sea.

Analysts argue that the US attempts to foil any route contacts between the Resistance camp’s countries that also include Iraq and Lebanon come to serve the Israeli security. The US concerns even doubled as in late June the Secretary-General of Hezbollah Sayyed Hassan Nasrallah warned that the future war waged by the Israeli regime against Syria or Lebanon could draw thousands of fighters taking Hezbollah side from the allied countries.

Now that Resistance camp’s forces are in Deir Ezzur and the three-year siege on the government forces is broken, not only the city sees end of daily plight but also the US meets its plans' heavy failure there. Despite that, it appears that Washington has yet to forsake its dreams as it seeks share in the post-ISIS Deir Ezzur.

A week after Deir Ezzur blockade was broken, the American-backed militias, a coalition of Kurdish and Arab fighters dubbed Syrian Democratic Forces, announced launching operation to liberate Deir Ezzur. The US has repeatedly tried to deploy these forces to the city, but ethnic challenges between the Kurds and Arabs as well as the priority of Raqqa operation, the de facto capital of the self-proclaimed ISIS caliphate, stripped Washington of effective militant force to attack Deir Ezzur. Now the situation urges the US to send the allied militants, who also have backing of the American troops, to spoil Syrian army forces' gains in the strategic city.

Nevertheless, analysts suggest that the US-backed fighters are not that ready for combat, unlike the Resistance camp that has cultivated strong resolution to link Syrian borders to Iraq’s, making it unlikely for Washington to see its objectives in Syria’s east realized.

Tags: Deir Ezzur US Syria
Short Link rasanews.ir/201oTZ
Share
0
Please type in your comments in English.
The comments that contain insults or libel to individuals, ethnicities, or contradictions with the laws of the country and religious teachings will not be disclosed