Rasa - It’s that time of year again and no one seems to care about the anniversary of the suspicious attacks on the World Trade Center that took place September 11th, 2001 – nearly sixteen years ago. 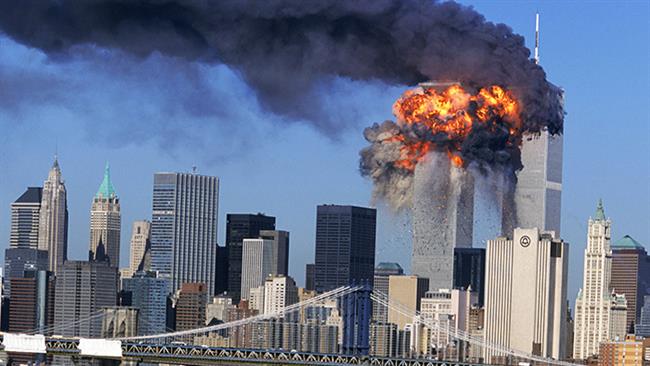 RNA - One way or another, the attack paved the way for the US-led invasion and occupation of Afghanistan, Iraq, Syria, Libya and Yemen, killing hundreds of thousands of innocent civilians along the way. It also destabilised the entire planet at the expense of the Muslim world. The consequences of America’s endless War on Terror are so terrible that victims in these nations and beyond will never be able to live a normal life for at least two generations.

Likewise, memories are still fresh for the survivors and the family members of victims who are to this day living with their losses while continuing to fight for accountability through both the military court in Guantanamo, where individuals allegedly involved in the attacks have been tried or are still facing painstakingly slow trials – and torture programs. This sixteenth anniversary of 9/11 is the first time since the attacks that the American families now have another legal recourse for seeking accountability not only from individuals but from a regime the US government itself says was involved in the attack: Saudi Arabia.

Introduced in the Senate on September 16th, 2015, the Justice Against Sponsors of Terrorism Act (JASTA) removed a major roadblock to justice by opening the way for private US citizens to file suit against the Saudi government, which was previously protected by the blanket immunity given to foreign governments. There is much that we do not yet know about what went on behind closed doors with regard to the orchestration of the suspicious 9/11 attacks, but the declassification of the portion of the 2002 Congressional Joint Inquiry known as the 28 pages on July 15th, 2016, after 14 years of secrecy, offered the preliminary hope of some much-needed answers.

The report makes clear: Of the 19 total hijackers who carried out the attacks, 15 were from Saudi Arabia, and evidence contained within the 28 pages points to financial connections between these individuals, (the Bush administration officials – emphasis here), and members of the Saudi government.

Curiously, however, Saudi Arabia’s suspected culpability in the attacks has not been reflected in US response. From the War on Terror in Iraq and Afghanistan to regime change campaigns in Syria, Libya and Yemen, and then to President Trump’s travel ban affecting a list of seven Muslim-majority countries - from which Saudi Arabia is notably absent, it would appear that the US government’s enthusiasm for retaliation against terrorism has a blind spot in the shape of the convenient alliance with Saudi Arabia.

The point of this write-up is not to say who was behind the suspicious attacks on 9/11; nor is it about getting at the truth of the extent to which the Saudi government sponsored and aided in the attacks, which is apparently a vital step towards justice and closure for families that, until JASTA, had the power of foreign sovereign immunity standing in its way. Despite fierce opposition from Saudi lobbyists and a presidential veto that argued that it would invite similar lawsuits against the United States government from victims of US war crimes in Afghanistan, Iraq, Syria and Yemen, JASTA was successfully passed into law on September 28th, 2016. Only two days later, the first lawsuit under this new act went forward, setting the precedent for many other lawsuits of its kind to follow. That’s good news for the American victims. But what about other victims of America’s War on Terror?

The rise of ISIL has been aided by the deliberate failure of the US government to investigate the role of Saudi Arabia in the 9/11 attacks and its support of Wahhabi-Takfiri movements such as Al-Qaeda in the years since. The failure to shine a full light on Saudi actions and particularly its involvement in 9/11 and terror financing has contributed to the Saudi ability to continue to engage in actions that are damaging even to the US and its so-called War on Terror - and in particular their support for ISIL and Al-Qaeda.

One reason that international justice has been less than stellar is that not enough attention was given to Saudi Arabia’s fostering of Al-Qaeda-type Wahhabi Takfiri movements, of which ISIL is the most notorious and successful. So far the CIA and other intelligence services have faced little criticism in the US for their deliberate failure to foresee the explosive expansion of ISIL and suchlike.

Therefore, shining the light on this blind spot - Saudi terror financing and criticism of the US policy towards Saudi Arabia - is important because it comes amidst growing doubts in the US about the wisdom of President Donald Trump’s plan to look to the Persian Gulf Arab monarchs as crucial allies in the US campaign to contain and, if possible, push back Iran and Russia after their victories against ISIL and Al-Qaeda in Iraq and Syria during the past few months.

Under the plan, Saudi Arabia has hosted a special training facility for “moderate” terrorists which are to fight both ISIL and the Syrian government, but later joined ranks with these terror groups at the expense of the US and the rest of the international community. A problem is that Saudi Arabia is still in love with ISIL and Al-Qaeda, whatever its role in their creation, and it gives priority to regime change in Damascus and containment strategy against Iran.

Whatever this is, it is wise to engage with the world community and delve into the central roles of Saudi Arabia, the CIA and the US government in creating these terror proxies. They have all been a central figure in financing ISIL and extremist groups. Attention should also be given to the Saudi monarchy’s long-term alliance with the Wahhabi clergy and its commitment to spread Wahhabism, the intolerant variant of Islam which denounces Shiite as heretics.

In summation, the Saudi role in the 9/11 attacks has long been public knowledge since 15 out of 19 of the hijackers were Saudis, and the leader of Al-Qaeda, Osama bin Laden, was a member of the Saudi ruling elite. The 9/11 inquiry found that, for financing, Al-Qaeda relied on a core group of private donors and organizations in Saudi Arabia and the Persian Gulf. Despite the Saudi connections of the 9/11 conspirators, Saudi Arabia and its citizens were treated with extraordinary leniency in the wake of the attacks. Some 144 individuals, mostly from the Saudi aristocracy, were permitted to fly back to Saudi Arabia within days of the attacks without being questioned by the FBI.

There were several other incidents in which US officials were inexplicably solicitous to Saudis. It is high time for the international civil society to investigate the American-Saudi-CIA links to the 9/11 attacks – and their subsequent strategy to muddy the waters, cover up for the Saudis, and distract attention from complicity by opening the door to terror proxies like ISIL and Qaeda-allied Nusra Front in the Middle East and beyond.

Tags: 9/11 US Qaeda
Short Link rasanews.ir/201oT6
Share
0
Please type in your comments in English.
The comments that contain insults or libel to individuals, ethnicities, or contradictions with the laws of the country and religious teachings will not be disclosed