Rasa - The UN’s human rights chief has called for urgent investigation into Saudi Arabia’s airstrikes against civilians in Yemen. 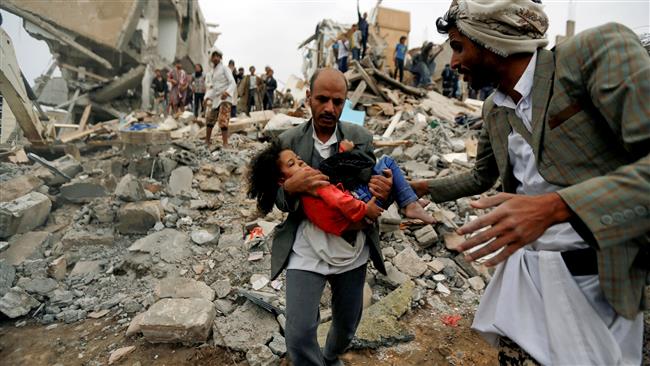 RNA - Zeid Ra‘ad al-Hussein made the remarks during a Monday speech to the UN Human Rights Council in Geneva after the global body attributed over 5,000 civilian deaths to Saudi Arabian airstrikes.

“The minimal efforts made toward accountability over the past year are insufficient to respond to the gravity of the continuing and daily violations involved in this conflict,” he said.

The latest call for an investigation was the third of such made by the UN's rights chief.

Last week, his office stressed that 47 countries on the Human Rights Council were not taking their responsibilities seriously, and called on them to probe the “entirely man-made catastrophe.”

On Friday, Human Rights Watch (HRW) lashed out at the Saudi-led coalition for its refusal to provide information on its role in the massive unlawful airstrikes against Yemen in an attempt to avoid international legal liability.

Bahrain, Kuwait, the United Arab Emirates, Egypt, Jordan, Morocco, and Sudan are part of Saudi Arabia's coalition. Qatar withdrew from the coalition in June amid a diplomatic rift with Riyadh, Manama, Cairo, and Abu Dhabi.

Saudi Arabia along with his allies has been pounding Yemen since March 2015 in an attempt to crush the popular Houthi Ansarullah movement and reinstate the former president, Abd Rabbuh Mansur Hadi, who is a staunch ally of the Riyadh regime.

Tags: Yemen Saudi
Short Link rasanews.ir/201oT3
Share
0
Please type in your comments in English.
The comments that contain insults or libel to individuals, ethnicities, or contradictions with the laws of the country and religious teachings will not be disclosed