Saudi-led quartet trying to turn Qatar into ‘state of trusteeship’

Rasa - Qatar says the “illegal” blockade imposed on Doha by the Saudi-led quartet of countries is aimed at forcing the peninsular Persian Gulf nation to become a “state of trusteeship.” 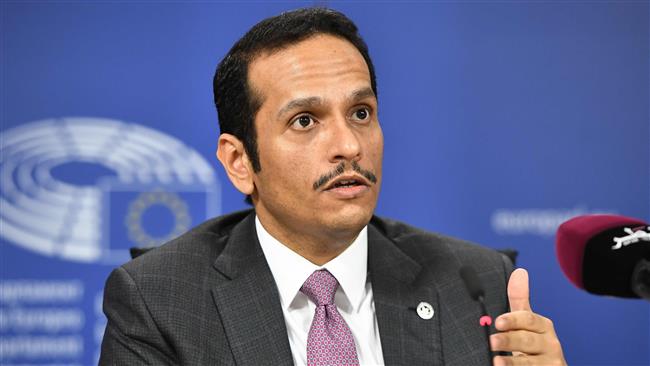 The widening rift in the region occurred on June 5, when Saudi Arabia, Bahrain, the United Arab Emirates (UAE) and Egypt severed ties with Qatar, officially accusing Doha of supporting “terrorism” and destabilizing the Middle East, allegations that Qatar says are unjustified and stem from false claims and assumptions.

To further pressure Qatar, Saudi Arabia totally closed its land border with its tiny neighbor, through which much of the peninsular country’s food supply crossed.

Later in June, the four Arab countries urged Qatar to abide by a 13-point list of demands if it wanted the crippling blockade lifted. The demands included shutting down the Doha-based Al Jazeera broadcaster, scaling back cooperation with Iran, closing the Turkish military base in Qatar, and paying an unspecified sum in reparations.

“It is no secret that the real motives behind the siege and the severing of diplomatic relations with the state of Qatar were not aimed at fighting terrorism,” added the Qatari top diplomat on Monday.

Al Thani noted that what the so-called siege countries were after was to “force Qatar into a state of trusteeship to interfere in its foreign policy, to undermine its sovereignty and to interfere in its domestic policy.” He also warned that Doha “cannot tolerate this situation.”

On July 21, Emir of Qatar Sheikh Tamim bin Hamad Al Thani said in a live TV address that the blockade against Doha was “a pre-planned smear campaign.”

Last week Riyadh suspended any talks with Doha, accusing it of “distorting facts,” shortly after a telephone call between the Qatari emir and Saudi Crown Prince Mohammad bin Salman suggested a breakthrough in the Persian Gulf row.

“Unfortunately, we have seen - half an hour later - retaliation from their side by issuing a statement that what we have issued is a lie,” Al Thani told reporters on the sidelines of the rights council, adding that his respective country was taken aback when Riyadh disputed a readout of the “positive” call.

However, he expressed his country’s readiness to enter into dialogue with the siege states in a bid to end the crisis.

“We are willing to talk to them, we are ready to engage if it is based on principles, which are not violating the international law and respect the sovereignty of each country,” he added.

Al Thani’s comments came just a day after his Saudi counterpart, Adel al-Jubeir, threatened that Doha would face more pressure if it did not comply with the list of demands the siege states made in June.

“We have taken some measures and we will continue to do so and we will maintain our position until Qatar responds,” he warned, adding that Qatar “must respond to these requests in order to open a new page,” al-Jubeir further said at a joint press conference with his Russian counterpart, Sergei Lavrov, in Saudi Arabia’s western port city of Jeddah on Sunday.

A number of attempts to heal the rift have so far been made, but all to no avail, including those of US Secretary of State Rex Tillerson, Turkish President Recep Tayyip Erdogan and Kuwaiti Emir Sabah al-Ahmad al-Jaber al-Sabah, whose country has been playing the role of a key mediator since the beginning of the crisis.

The coordinated move against Doha is spearheaded by Riyadh, which often manages to have its vassal states fall into line. Saudi Arabia itself is known as the main sponsor of Wahhabi terrorists it has accused Qatar of supporting. Some analysts believe the Saudi anger is rather because Qatar acts independently of Riyadh, including in its relations with Iran.

Tags: Qatar Saudi
Short Link rasanews.ir/201oT2
Share
0
Please type in your comments in English.
The comments that contain insults or libel to individuals, ethnicities, or contradictions with the laws of the country and religious teachings will not be disclosed