Rasa - Hundreds of activists have staged a rally in London to protests Myanmar’s ongoing crackdown of Rohingya Muslims, asking the government of UK Prime Minister Theresa may to take urgent action in order to end the “silent genocide.” 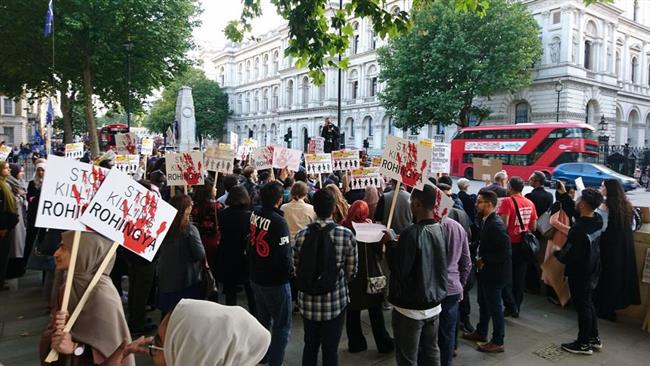 RNA - Around 200 people gathered outside government offices at 10 Downing Street over the weekend, carrying banners and chanting slogans that condemned the Myanmar government’s actions.

Chanting “Stop Rohingya Genocide,” the protesters said London needed to act using its status as a permanent member at the UN Security Council.

“This is anger! We are expressing our anger against the Burmese government who is doing genocide against our people,” Nurul Islam, president of Arakan Rohingya National Organization (ARNO), told Turkey’s Anadolu news agency.

“We want to draw the attention of the UK government, being a member of the [UN] Security Council and a powerful country,” he added.

Holding graphic photos of the women and children brutally killed by the Myanmar army on a daily basis, the protesters said London needed to go further than just condemning the murderous rampage and review its ties with the Southeast Asian country.

The UK has sold over £500,000 worth of weapons to the Myanmar government in the last three years.

“We don’t want to live a life of humiliation as refugees and as beggars in Bangladesh or elsewhere. We want to live in our own homeland and die in our homeland,” Islam said.

Myanmar's security forces have long been attacking Rohingyas and torching their villages since October 2016, in a bid to push them out of the western state of Rakhine. The attacks have been intensified since August 25, with State Counselor Aung San Suu Ky ignoring international demands to call off the operation.

Thousands of Rohingyas have already fled their homeland to take refuge in Bangladesh. Many people have been killed during the perilous boat journeys on the Naf River, which separates the two neighboring countries.

Last week, Members of UK Parliament asked May’s cabinet to step forward and help end the violence, which they described as “ethnic cleansing.”

Tags: UK Myanmar
Short Link rasanews.ir/201oSx
Share
0
Please type in your comments in English.
The comments that contain insults or libel to individuals, ethnicities, or contradictions with the laws of the country and religious teachings will not be disclosed