Rasa - Saudi Arabia has suspended plans to hold talks with Qatar on how to resolve the ongoing crisis between Doha and four Arab states minutes after the Saudi crown prince and the Qatari ruler discussed the planned negotiations during a phone call. 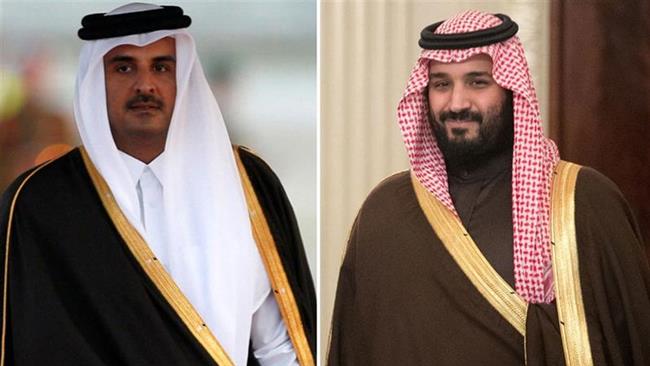 During the phone conversation, both leaders stressed the need to resolve the crisis through dialogue.

"During the call, the emir of Qatar expressed his desire to sit at the dialogue table and discuss the demands of the four countries to ensure the interests of all," Saudi state news agency SPA reported, adding that "the details will be announced later" after consulting with the United Arab Emirates (UAE), Bahrain and Egypt.

Qatar News Agency’s (QNA) reported that during the phone call both sides "stressed the need to resolve the crisis by sitting down to the dialogue table to ensure the unity and stability” of (Persian) Gulf Cooperation Council countries.

Sheikh Tamim welcomed the proposal of Prince Mohammed during the call "to assign two envoys to resolve controversial issues in a way that does not affect the sovereignty of the states," the Qatari news agency added.

The phone call is believed to be the first official contact between the two Arab kingdoms since the beginning of the crisis three months ago.

QNA was not accessible at the time of this report, but according to Qatari news network Al Jazeera, QNA had said that the phone call was coordinated by US President Donald Trump.

"What was published on the Qatar News Agency is a continuation of the distortion of the Qatari authority of the facts," SPA reported, citing the Saudi official.

"The Kingdom of Saudi Arabia announces the suspension of any dialogue or communication with the authority in Qatar until a clear statement is issued clarifying its position in public," it added.

According to a White House statement, Trump told the three Persian Gulf Arab rulers that unity among Washington's Arab partners to promote regional stability and counter “the threat of Iran.”

Trump also stressed that all countries must remain committed to countering terrorism and extremist ideology and cut off funding for terrorist groups, the statement added.

Saudi Arabia, Bahrain, Egypt, and the United Arab Emirates cut their diplomatic ties with Qatar on June 5, accusing Doha of sponsoring terrorism and destabilizing the region.

The Saudi-led bloc has imposed sanctions against the tiny Persian Gulf country, including restrictions on Qatari aircraft using their airspace. Qatar’s only land border with Saudi Arabia has also been blocked as a result.

The boycotters later released a 13-point list of demands, including the closure of Al Jazeera news network and downgrade of relations with Iran, in return for the normalization of diplomatic relations with Doha.

Qatar has rejected the demands as an attack on its sovereignty.

Experts have touted the Qatar crisis as the fallout of Trump’s visit to Riyadh in early June, when he signed the largest single arms deal in US history with King Salman bin Abdulaziz Al Saud to sell Riyadh $110 billion in arms.

In the early days of the crisis, Trump took to Twitter to praise the Saudi-led bloc’s decision to cut ties with Qatar, implying that it was the fruit of his first visit to the Middle East.

However, on June 14, the US signed a $12-billion deal with Qatar to sell F-15 fighter jets to the country.

Tags: Qatar Saudi
Short Link rasanews.ir/201oSG
Share
0
Please type in your comments in English.
The comments that contain insults or libel to individuals, ethnicities, or contradictions with the laws of the country and religious teachings will not be disclosed