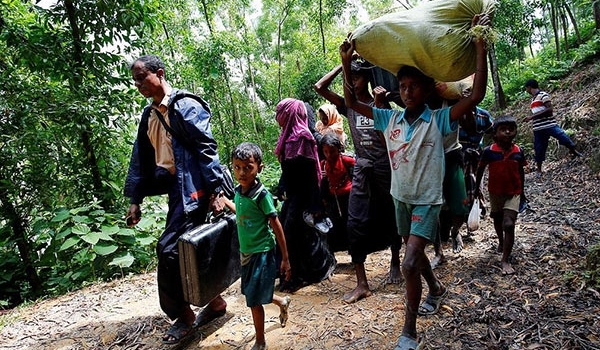 RNA - "We strongly condemn the brutal crimes and atrocities which the authorities of Myanmar are committing against Muslim minority of Rohingya,” a statement by the ministry’s spokesman Ahmed Jamal said, NRT reported.

The ministry also called on the United Nations, international community and the Islamic countries to take measures to stop the “brutal massacre which the world hasn’t seen.”

Iraq’s foreign ministry called for urgent efforts to open a way for the emergency teams and humanitarian aid to reach Rohingya people.

The independent Burma Human Rights Network (BHRN) group said on Tuesday that the systematic persecution of minority Muslims is on the rise across Myanmar and not confined to the northwestern state of Rakhine, where recent violence has sent nearly 90,000 Muslim Rohingya fleeing.

The latest violence in Myanmar's northwestern Rakhine state began on Aug. 25, when Rohingya insurgents attacked dozens of police posts and an army base. The ensuing clashes and a military counter-offensive have killed at least 400 people and triggered the exodus of villagers to Bangladesh.

The latest estimate of the numbers who have crossed into Bangladesh since Aug. 25, based on calculations by UN workers, is 123,600.

That takes to about 210,000 the number of Rohingya who have sought refuge in Bangladesh since October, when Rohingya insurgents staged smaller attacks on security posts, triggering a major Myanmar army counteroffensive and sending about 87,000 people fleeing into Bangladesh.

Tags: Myanmar Iraq
Short Link rasanews.ir/201oRe
Share
0
Please type in your comments in English.
The comments that contain insults or libel to individuals, ethnicities, or contradictions with the laws of the country and religious teachings will not be disclosed