Rasa - It is an underestimation for the United Nations to say that more than 5,000 civilians have died in the Yemeni conflict since March 2015 and the terrorist group Al-Qaeda has become "operational" expanding into the southwestern city of Taiz. 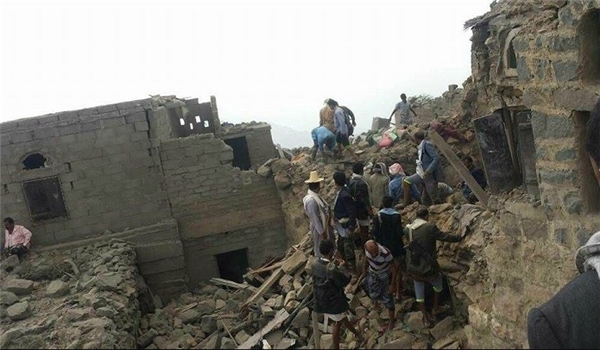 RNA - Over 14,000 innocent people have been slaughtered by the US-backed, Saudi-led coalition and the number is rising by the day – even by UN’s own estimation. But that’s not the point here. A UN Human Rights Council report says human rights violations and abuses continue unabated in Yemen, along with unrelenting violations of International Humanitarian Law, with civilians suffering deeply the consequences of an "entirely man-made catastrophe."

The UN report, however, is way off the line to say that this is a ‘’civil war.” This is a US-backed, Saudi-led war on the region's poorest country, which began in March 2015 to restore power to fugitive president Mansour Hadi, a close ally of Riyadh.

The humanitarian crisis, with nearly 18.8 million people in need of humanitarian aid and 7.3 million on the brink of famine, is a direct result of the behaviour of the Saudis, and their allies alone. They consist of Kuwait, the United Arab Emirates, Bahrain, Egypt, Jordan, Morocco, Senegal, the Sudan, and, until June 2017, Qatar. These include indiscriminate attacks, attacks against civilians and protected objects, sieges, blockades and restrictions on movement. Saudi Arabia, with support from the United States, has imposed a naval and airport blockade to assist the illegal government who it supports and whose term ended 2 years ago, and resist the popular forces of Yemen.

Before it gets too late, therefore, the world community, the UN in particular, should lay pressure on Riyadh and its main ally the United States to end the unnecessary conflict and take immediate measures to ensure humanitarian relief for civilians. Despite backing the Saudi-led war from the beginning, the US now claims to want to restrain the bombing campaign:

But senior US officials, who are enthusiastic about the Saudi war plan, are increasingly dismayed by heavy civilian casualties and now believe it highly unlikely that former president Hadi can be reinstated without a ground invasion. They also know that the turmoil has allowed Yemen’s Al Qaeda affiliate to expand its territory.

It is indeed highly unlikely that Hadi could be restored through the criminal campaign, and it is always very likely that Al-Qaeda in the Arabian Peninsula benefits from the Saudi campaign against one of the group’s main adversaries inside Yemen - Ansarullah. All of the pitfalls that US officials identify here are fairly obvious from the start, so what purpose is served by providing US backing to a campaign that the administration should have known would fail to achieve its unrealistic goals?

If the US wants the Saudis and their allies to curtail their campaign, the US ought to be scaling back and then ending its support for that campaign. The US cannot back a reckless client’s war and then hope to finesse how the client wages it. The Trump administration is trying to have it both ways on this war by backing it to the hilt while trying to distance itself from the foreseeable consequences of the war that it has been enabling for more than two years now.

The US efforts to curtail the bombing campaign have so far been unsuccessful, but then why wouldn’t the Saudis ignore US protests as long as US support continues to flow? As the Saudi-led war continues to cause more civilian casualties, the US has been increasing its involvement in the war, and is now engaging in a dangerous escalation of its involvement at sea. If the US is “dismayed” by the effects of the Saudi attack, it has done nothing to show this by reducing or ending support for the Saudis and their allies.

On the contrary, everything the Trump White House has done from building illegal military bases to speeding up weapons deliveries to the Saudis is a bright green light to the regimes attacking Yemen that the US approves of their campaign. Only now that the campaign is failing as the US should have anticipated is the Trump administration concerned to put up a flashing yellow light in front of the Saudis. Instead, it ought to have opposed the war from the beginning, and it should cut off all support for the war now before the US is pulled in even deeper.

In summation, UNSC Resolution 2216 is way off the line to demand an end to violence in Yemen, recognise the exiled, Saudi-supported President Mansour Abd Rabbuh Hadi as the legitimate leader, support the Saudi coalition’s intervention on his behalf, and call for negotiations between them and the Ansarullah movement in control of large parts of the country. Mansour Hadi was elected to office for two years and he served his term that ended two years ago. So, he is not representing anyone in the country.

The Ansarullah movement is representing the Yemeni people. They are now in control of Sanaa – with support from the former party of ex-president Ali Abdullah Saleh – and have brought peace and stability to the capital. More importantly for the world, they have been tackling elements of terrorism. The UN and the wider international community should be wary of demonising the Ansarullah forces and branding them as owned by Iran. They are not.

A ceasefire, negotiations and a replacement for the unfair UN resolution could be achieved with world support. Some member states hold the pen at the UN on matters concerning Yemen. This will all be extremely difficult, but possible. The humanitarian situation is nothing short of catastrophic. The world needs to wake up to what is going on. Yemen is crumbling. As a matter of urgency, there must be free movement of goods into and across the country. Deliveries of food, water and medicine should be facilitated. Minds need to be focused to find a political solution - and quickly.

Tags: Yemen Saudi
Short Link rasanews.ir/201oRO
Share
0
Please type in your comments in English.
The comments that contain insults or libel to individuals, ethnicities, or contradictions with the laws of the country and religious teachings will not be disclosed