Rasa - The wife of jailed leader of the Palestinian Fatah Movement, Marwan Barghouti, has said that the Tel Aviv regime will not permit her to visit her spouse. 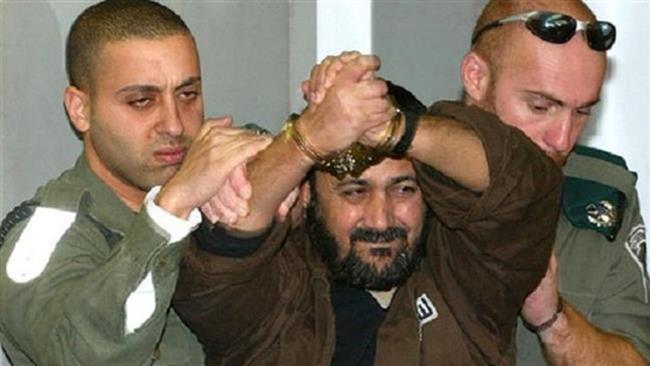 RNA - On Monday, Fadwa Barghouti said that she was informed of the ban after attempting to visit her husband, who led a mass hunger strike earlier in the year.

She noted that the prison authorities said the ban was due to her role in the hunger strike and will be in place until 2019. The rest of Barghouti’s family have also been denied entry into the occupied Palestinian territories.

Assaf Liberati, a spokesman for the regime’s prison service, confirmed the claims, noting that they were for "security reasons" resulting from the hunger strike.

Led by Barghouti, the mass strike, dubbed the Freedom and Dignity Strike, began on April 17. Thousands of prisoners joined the action and started to refuse food in incarceration to protest their dire conditions in Israeli jails.

The hunger strikers were demanding appropriate medical care and treatment in Israeli prisons, as well as an end to solitary confinement and the so-called administrative detention, which is a form of imprisonment without trial or charge.

The strike came to an end in late April after Israeli authorities agreed to a deal with the Palestinian prisoners.

Some 6,500 Palestinians are currently being held in Israeli jails, over 500 of them arbitrarily, according to figures provided by the Palestinian prisoners’ rights group Addameer in January. Palestinian inmates complain that they have been subjected to assault and torture at Israeli prisons.

Tags: Palestinian Israel
Short Link rasanews.ir/201oQj
Share
0
Please type in your comments in English.
The comments that contain insults or libel to individuals, ethnicities, or contradictions with the laws of the country and religious teachings will not be disclosed