Rasa - A Nobel laureate and several Muslim nations have strongly denounced and staged protests against Myanmar's government over persecution of Muslim Rohingya minority in the western state of Rakhine. 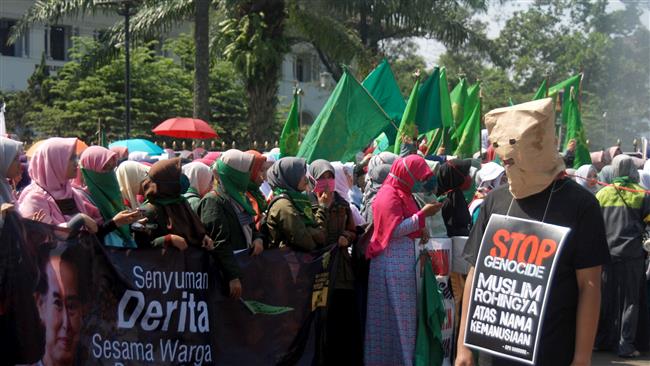 RNA - Malala Yousafzai, a Pakistani activist for female education and the youngest-ever Nobel Prize laureate, said in a statement posted on social networking website Twitter that her “heart breaks” at the sufferings of Rohingya Muslims. She demanded that Myanmar’s de facto leader Aung San Suu Kyi condemn the violence against the Rohingya minority.

“Over the last several years, I have repeatedly condemned this tragic and shameful treatment,” Yousafzai said, adding, “I am still waiting for my fellow Nobel laureate Aung San Suu Kyi to do the same. The world is waiting and the Rohingya Muslims are waiting.”

Suu Kyi has done next to nothing to end the plight of the minority Muslims.

Pakistan’s Foreign Ministry has also voiced deep concern over reports of a growing number of deaths and the forced displacement of Rohingya Muslims. Islamabad has urged Myanmar’s government to investigate reports of massacre and to hold those involved accountable.

Meanwhile, Indonesian President Joko Widodo has called for an end to the violence in Rakhine state. The president also sent his Foreign Minister Retno Marsudi to Myanmar, where she with met Monday with Suu Kyi and armed forces commander Min Aung Hlaing.

In an interview with Indonesian TV, Marsudi sidestepped questions about domestic pressure in the world’s most populous Muslim nation to sever diplomatic ties with Myanmar.

On Monday, several hundred Muslim women demonstrated outside Myanmar’s embassy in the Indonesian capital Jakarta. They called for the government to take a tougher stance against the Rohingya Muslims’ persecution.

“The world remains silent in the face of the massacre of Rohingya Muslims,” said Farida, an organizer of protest who used a single name.

“They have been tortured and killed like animals by Buddhists in Myanmar,” she told the crowd outside the embassy, adding, “We demand mobilization of our military to rescue the Rohingya.”

Over the weekend, angry protesters in Jakarta set fire to a poster of Suu Kyi outside the Myanmar embassy.

Dozens of armed police are guarding Myanmar’s embassy in Jakarta, which is cordoned behind barbed wire, after a Molotov cocktail was thrown at it over the weekend.

Local media reports said that further protests are set for this week. One group plans to stage a protest at Borobudur, a famous ancient Buddhist temple in central Java.

Meanwhile, the Lebanese Hezbollah resistance movement, in a Monday statement, denounced the “heinous” crimes against the Rohingya.

“These oppressed people who are subjected to the most heinous massacre are, in fact, victims of the Myanmar regime’s crimes … and global plots that have targeted them and other Muslims in the world,” read part of the statement.

Hezbollah called for global protest against the massacre of Rohingya Muslims in Rakhine.

Meanwhile, thousands gathered in Russia's Chechnya region to protest against the plight of the Rohingya.

"Stop this bloodshed. We demand [that] the guilty are punished and crimes against humanity are investigated," Chechen leader Ramzan Kadyrov told the large crowd in central Grozny in a live broadcast on local television. "I am convinced that hundreds of millions of people around the world will hear our demand."

The protest in Chechnya drew hundreds of thousands of people from across the Russian Caucasus, according to reports.

This comes as the latest eruption of violence in Rakhine state has killed more than 400 people and triggered an exodus of Rohingya to Bangladesh.

Human Rights Watch says satellite imagery shows 700 buildings were burned in the Rohingya Muslim village of Chein Khar Li, just one of the 17 locations in Rakhine state where the rights group has documented burning of homes and property.

According to the United Nations, at least 87,000 refugees from Rakhine state have fled to neighboring Bangladesh since violence escalated in late August, overwhelming existing camps for the displaced.

In a separate development on Monday, Bangladesh authorities forced more than 2,000 Rohingya Muslims to leave a remote island where they were hiding out after fleeing violence in Myanmar.

The vast majority have entered overland or by crossing the Naf border river. But as desperation grows, some are braving the open seas to reach the small island of St Martin's nine kilometers off Bangladesh's coast.

Officials said the island's 9,000 residents, who share close cultural ties with the Rohingya, had been hiding around 2,000 recent arrivals but were ordered to give them up.

Farid Ahmed, an elected official said that 2,011 Rohingya Muslims, including children, were rounded up at the coast guard headquarters on Sunday evening and taken away.

Bangladesh coast guards have intercepted and turned away hundreds more refugees as they tried to approach the island.

Bangladesh was already home to around 400,000 Rohingya Muslims before the current crisis and has made clear it does not want to take in more.

The United Nations believes the government of Myanmar might have committed ethnic cleansing and crimes against humanity in its crackdown.

Tags: Muslim Rohingya Myanmar
Short Link rasanews.ir/201oQd
Share
0
Please type in your comments in English.
The comments that contain insults or libel to individuals, ethnicities, or contradictions with the laws of the country and religious teachings will not be disclosed